Gulliver's Travels Read-Along Part One: A Voyage to Lilliput. 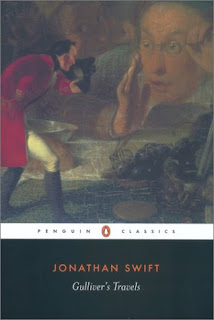 I am very excited the first of my two June read-alongs is well under way. Gulliver's Travels is a huge treat and it has been a long time since I have read it and I am glad to be sharing the experience with a group of my readers!

I first read about Gulliver in a class I took in college. The class focused on literature after Shakespeare and through the 18th century. My professor was in love with Swift, so we read a bunch of his work. Gulliver's Travels was by far my favorite.

I should also point out that I am reading the very same copy I read for that class, the 1998 Oxford World's Classics Edition (which was reissued a few years ago with a new picture, so I cannot find an image of my own book). I was sad to see, however, that I read this book during my highlighting stage, so there is blue highlighter throughout the book. Sad, but I thankfully grew out of that!

For those of you who have never read it and are not participating, it is important that I point out that much of the book is satirical. Swift is pointing out numerous flaws within society and government through his exploration of 4 different lands that Gulliver visits.

In this first section, Gulliver explains his past and how he wound up on a boat in the first place. As a doctor in a smaller town, Gulliver realizes he must leave in order to support his family. Since he also loves to travel, he signs up to work on ships to learn more about the world around him.

He shipwrecks and wakes on a beach to find himself tied down with scores of "little men and women" around him. This scene is probably one of the most famous from the book as a whole, and it is always fun to read about the men, who are only 6 inches tall, tying him down and attempting to shoot him with their small arrows. After attempts to assure the people that he is safe, he is led back to their city and becomes a favorite in court. The king grows to really like Gulliver and he seems to find some kind of happiness in observing the kingdom and court. There are a lot of noted differences between his height and the people around him.

There is where a lot of the satire comes in, as well as some historical knowledge. Gulliver's observations of court is a definite jab at King George I. He sees the Lilliputians as silly and vicious, much as how Swift saw the court in England at the time. Gulliver's reflections on the court show that he believes the king and his subjects to be far inferior.

Eventually, however, Gulliver's happy moments in Lilliput come to an end, as a plot to accuse him of treason unfolds. A friend helps his escape to the neighboring land of Blefuscu (the enemies of Lilliput), where he finds a washed up boat and returns to humanity.

This section is definitely a little lighthearted and through Swift's satirical lens, the reader can see the faults in the kingdom of Lilliput and transfer those thoughts to the government of England.

There is also a lot of humor that can fall under the radar as you read. One of my favorite passages is when a part of the palace catches on fire and Gulliver puts it out the only way he can:

"The Heat I had contracted by coming very near the Flames, and by my laboring to quench them, made the Wine begin to operate by Urine; which I voided in such a Quantity, and applied so well to the proper Places, that in three Minutes the Fire was wholly extinguished," (43).

This is what inevitably leads to the fall of Gulliver's favor in Lilliput and his eventual dismissal and escape.

I love the way Swift makes this come alive. We are in Lilliput with Gulliver, and we too as exploring their society and way of life. When Gulliver learns about how they educate their children, we too are exploring the odd way that children are removed from their homes to be brought up as functioning members of this society.

We are also there to read the little jabs at the society that Swift lived in. Before the incident with Gulliver putting out the fire, we learn that the fire emerged when a maid forgot to tend the fire since she was reading a Romance (43). Romantic types of novels and writings were emerging in this era, much to the disdain and horror of prominent writers. Perhaps Swift is cautioning young women to stay away?

There is also the scene where Gulliver is forced to turn in his weapons, something that was done to some Jacobite supporters in Ireland in the 1710s, shortly before Swift's work was published. The intended "comical scene" sheds some light about the feeling of weapons being taken away from the men who own them.

In addition to taking his weapons, the people of Lilliput also search his pockets, and their delights at finding mysterious objects in his pockets is pretty funny. The reader has to think to himself, "I know what that is," but as time passes on, we see objects from the past and wonder, what is that? It is like showing an Ipod to a child today and having them well aware of what it is and what it does. Take it back to the 1950s and people would have no idea what its purpose is.

In all, this section on Lilliput is one of my favorites in the book. It gives us a great glimpse of who Gulliver is as well as Swift's satirical sense of style. I hope all of you enjoyed it as well and I am looking forward to reading your thoughts as well!