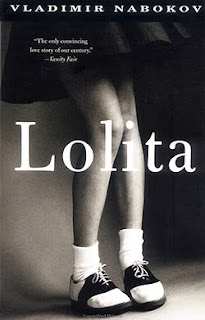 Before you read any further, I should point out that this post was originally written when I finished the book during the read-a-thon (yes, a long long time ago). It has been sitting in draft form waiting to be posted. Here it finally is. :)

"The days of my youth, as I look back on them, seem to fly away from me in a flurry of pale repetitive scraps like those morning snow storms of used tissue paper that a train passenger sees whirling in the wake of the observation car," (15).

I think I am in love with Vladimir Nabokov. I am still trying to wrap my head around the novel I just finished and understand the strong emotional reaction I had to it.

I know that when I explain this novel and say what it was about, some might say, "Why would you even read THAT?" But there is a reason why this novel is so highly regarded. It is a beautiful piece of fiction, even if it about a middle-aged man and his obsession and love for the young Lolita.

I'm really not quite sure where to begin. I mean, there is a man, Humbert Humbert, who has this fascination with young girls, who he calls nymphets. He watches them, and judges them on the beauty of their slender legs, their youthful faces, and prepubescent bodies. It is slightly creepy but fascinating at the same time as we watch him search for a girl to molest, to be with.

He moves in with Lolita's mother as a lodger. He falls hard for the beauty and youth of little Lolita, and is saddened when she goes away to summer camp. Her mother gives him a choice: marry her or leave. Her determines to marry her solely to remain close to his Lolita. Obviously, it comes to a crisis when she realizes his affections for her young daughter.

Fortunately for him, tragedy strikes and he is allowed to remain close to Lolita.

It is certainly an odd book to say you love, wandering through his dirty mind and his fascination with a girl that should be so childlike. But the Lolita we see is not. She knows far more about sex and manipulation than you would want in a girl her age. She teases him, manipulates him, and uses him as much as he uses her. In a way, they fit together well.

But the real beauty and strength of this book is the writing. Nabokov has a gift for stringing together language in a way that makes your heart ache. It is through this gift for storytelling that we begin to understand Humbert Humbert and his Lolita. We see them as real people, with faults and disturbing tendencies, but they aren't just shells of a reality. They come alive, and could be anyone.

I marked so many passages that my husband has been making fun of me. There are so many to choose from, so many beautiful lines that I want to keep forever. Here a few of my other favorite passages. See how Nabokov winds so many comparisons and descriptions to make the scene alive.

"Then she crept into my waiting arms, radiant, relaxed, caressing me with her tender, mysterious, impure, indifferent, twilight eyes-for all the world, like the cheapest of cheap cuties. For that is what nymphets imitate-while we moan and die," (120).

"At the hotel we had separate rooms, but in the middle of the night she came sobbing into mine, and we made it up very gently. You see, she had absolutely nowhere else to go," (142).

"There was no shock, no surprise. Quietly the fusion took place, and everything fell into order, into the pattern of branches that I have woven throughout this memoir with the express purpose of having the ripe fruit fall at the right moment; yes, with the express and perverse purpose of rendering-she was talking but I sat melting in my golden peace-of rendering that golden and monstrous peace through the satisfaction of logical recognition, which my most inimical reader should experience now," (272).

I am kind of sad to be putting this one away. I kind of want to soak into it even more and absorb more of the language that Nabokov so mastered. I am certainly looking forward to Pnin and if I had a copy on my shelf, it would be in my hands next.

For those of you who have read Lolita, what did you make of it?
Posted by Allie at 9:30 AM