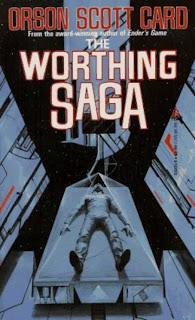 I have always claimed Orson Scott Card as one of my favorites writers. And while deep in my mind I know that there may be better and more skilled writers out there, I still love his writing; particularly his earlier novels.

I think I love these novels as they were my first foray into the science fiction world. Card introduced me to the genre, and for that I owe him.

This particular novel is one that is overlooked. It is a compilation of one of Card's early novels with nine short stories. Together they tell the story of Jason Worthing and a society that prizes longevity of life over everything else.

If you are wealthy enough, you can afford to sleep away years of your life. You may only be awake one year in ten, or one day in twenty years to live your life as long as possible. The idea was to speed up human progress, to save the lives and minds of those who were creating great things. In the end, it began to destroy humanity.

In desperation, ships were sent to the far reaches of space. They carried seeds, animals, and human embryos. Each ship carried a sole living man to begin a life and society in a new world. Jason Worthing was one of these men and the stories in this novel are his story-the way he took hold of a new life and molded it.

This novel showcases Card's writing at its best-a deep exploration of human nature and they we we struggle to survive. It is powerful, and like most of Card's works, warns us of impending doom if we continue the way we are. However, it never seems to preach at the reader, but shows us a possibility of renewal, and what we could do if we had a chance to do it over.

It is an interesting concept, and one that is well developed here. It is thought-provoking and wonderful and I do hope you consider trying it.

"In many places in the Peopled Worlds, the pain came suddenly in the midst of the day's labor. It was as if an ancient and comfortable presence left them, one that they had never noticed until it was gone, and no one knew what to make of it at first, though all knew at once that something had changed deep at the heart of the world. No one saw the brief flare in the star named Argos; it would be years before astronomers would connect the Day of Pain with the End of Worthing. And by then the change was done, the worlds were broken, and the golden age was over," (chapter one).
Posted by Allie at 9:30 AM