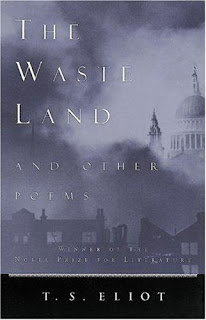 Before you read any further, I should point out that this post was originally written when I finished the book during the read-a-thon (yes, a long long time ago). It has been sitting in draft form waiting to be posted. Here it finally is. :) And I should point out that because this "book" is actually a poem, everything about this is in one post. When does that ever happen? ;)

I am a huge poetry fan. And while I don't read it as much as I probably should, I do read more than the average Joe. There is something very relaxing and comforting about a poem.

This is the one solitary poem that made my list. I took off quite a few others, including Eliot's other masterpiece "The Love Song of J. Alfred Prufrock" in an attempt to rein in my list, but this one had to stay, only because I had never read it. Seems silly, doesn't it? All the other poems were removed, but this little title stayed through a bunch of cuts and edits to be in the final 250.

And while I know it is not a "book" it stills counts as one title off my list.

At only 25 pages, and a poem, this was a quick and easy read for the purposes of the read-a-thon. I will have to remember to read some poetry in the next read-a-thons if I ever get the chance.

The poem is structured into five sections: The Burial of the Dead, A Game of Chess, The Fire Sermon, Death by Water, and What the Thunder Said. Each section has its tone, voice, and mood. The narrator switches and gives the poem a very melancholy feel.

To be honest, this is a hard poem to describe, especially that I read it in one sitting and haven't had a great deal of time to digest all of the little nuances that come into play with poetry. But, speaking as someone who has read it for the first time I will say this: it captures a lot of the desolation and pain that was felt after The Great War (WWI). Some of the scenes Eliot described seemed to be of empty battlefields and rebuilding.

As I have not lived through a great war, or had personal destruction come down around me, I cannot really relate to the struggle of that kind of pain-of seeing the world crumbling and life disappear. But Eliot captured it for me in his words, so I could feel a glimpse.

I loved his language. Everything was vivid and alive in the way that only poetry can be. Here is the beginning to show what I mean:

It is simply beautiful. My favorite of the five sections was the last, the one called What the Thunder Said.

I really believe this captures the mood of the entire poem. Those last three lines I choose were just so powerful as I read them.

I wish I knew more about Eliot so I could understand the deeper meanings of this poem. But he is not a poet I am familiar with. I think to truly understand poetry, you just read and reread it, immerse yourself in the knowledge of the poet, and just let it sink in. I haven't the opportunity to do that now, but I know I will be returning to Eliot eventually, to read more and learn more about the man who wrote such a chilling poem.
Posted by Allie at 4:48 PM