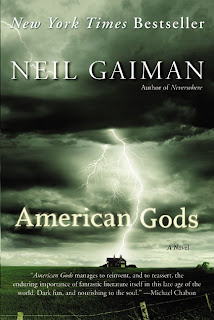 I am really surprised that I haven't featured a novel by the wonderful Neil Gaiman yet. While I discovered him only in the last few years, he has become an author that I truly love. His work is original and marvelously written. And while I haven't read his complete backlist, I have read enough to know that I want to own everything this man has written.

My first experience with Gaiman is the book pictured at right, American Gods. I loved the title and the premise of this novel. Taken from Goodreads.com,

"After three years in prison, Shadow has done his time. But as the days, then the hours, then the minutes, then the seconds until his release tick away, he can feel a storm building. Two days before he gets out, his wife Laura dies in a mysterious car crash, in apparently adulterous circumstances. Dazed, Shadow travels home, only to encounter the bizarre Mr. Wednesday claiming to be a refugee from a distant war, a former god and the king of America. Together they embark on a very strange journey across the States, along the way solving the murders which have occurred every winter in one small American town. But they are being pursued by someone with whom Shadow must make his peace..."

What I loved most was the originality. I loved the gods that Shadow and Mr. Wednesday encountered. The novel didn't make light of any of the big names in religion, but focused on the gods of ancient people-the ones that were "dying out" from a lack of followers. It also creates new gods-the gods of technology, internet, and media that are fighting for prominence in the minds of believers. The novel is the story of their war, and of Shadow's involvement in the fight between gods.

I love the contrast between old and new in the novel. America is making a shift away from an emphasis on religion. Religion was far more prevalent in the lives of our ancestors. Today, we spend more time watching TV, seeing movies, and focusing on other things than reading the Bible with our families and celebrating our gods. Gaiman's commentary on this isn't over our heads, but gives a subtle warning of where we are going. You can make of it what you will, but it fascinated me and made me a lover of Gaiman.

I also love how Gaiman creates a dark and seedy world within modern day America. This is where he truly shines-showing us what our worlds could, and might be. The result is a world that is both wonderful and strange. He has this skill in many of his other novels (Neverwhere for example). Gaiman is truly the master of creating a mysterious urban setting.

I haven't read the "Sequel" to American Gods-Anansi Boys, but it is on that never-ending TBR list of mine. If you haven't given Gaiman a chance yet, you definitely need to!
Posted by Allie at 8:21 AM