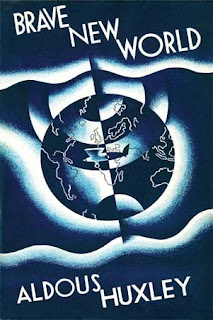 This was another book I finished during the read-a-thon (yes, the one that was a month ago. I'm a little behind).

I mentioned in my first post that this was a book that I began to read one years before I went back to college. And I attempted to finish it before classes got busy, but I failed miserably. I think that part of the reason I crashed and burned so quickly is that there is a long passage in the first part of the book that is incredibly confusing. There are 2 conversations going on, but the dialogue is mixed. Here is what I am talking about:

"'I simply must get one like it,' said Fanny.

'There were some things called the pyramids, for example.'

'And a man called Shakespeare. You've never heard of them of course.'

'It's an absolute disgrace-that bandolier of mine.'

'Such are the advantages of a really scientific education,' (51).

It is confusing when you first read it. Your mind jumps back and forth as you try to keep both conversations in mind and you have to ask yourself, why did Huxley want to do this to me? But, as much as I hated it that first time, I got it this time. And, once I got to the end of those two conversations, I realized he had a purpose-showing a contrast between the different groups of people who live in this new society.

I was much more connected to this novel in this attempt (and success) at reading it. In fact, I was swept into it and even yelled at Matt to leave me alone while I was absorbed (don't worry, he wasn't too offended). Where I felt like I was connecting to the story that first time I tried to read it, I was sucked in and kept flipping pages to see where Huxley was leading me.

And boy, was this book an adventure. Huxley takes us into a world where embryos are sorted into classes. Depending on the embryos class, it is nurtured for a different task and placement in the world. Those who are slated for life at a lower class, like Epsilon, are given less oxygen so their brain functions become limited. Alphas are nurtured lovingly-given more chance and training to fulfill their intellectual duties to this society. In all, its kind of creepy-conditioning people to fill certain needs and tasks. At the time in which this was written (1932), this had to be an extraordinary way of thinking. I am sure that no one thought we would see the day where we could tamper with embryos in the womb, and here we are with some of those capabilities.

The rest of the novel continues on this theme-the right of mankind of alter itself as it please vs. the way we were born and meant to recreate our species. There is a scene late in the novel about a woman who was left in the "wild" for a number of years-without the ability to alter herself to make her visually appealing. Her anger at what she had become (naturally btw) was infuriating and the revulsion of the other characters to her natural state repulsed me.

I can see the commentary that Huxley is making; he discusses in a futuristic and extreme format how our obsession with looks and youth can take us down a very dangerous path. But, it seems as if his modern audience perhaps hasn't heard his message. I see those TV shows with the woman who are more silicone than cell tissue and human flesh. Its disturbing and creepy. And I can see where a society like the one Huxley portrays is a very real possibility. Of course there would be benefits to farming embryos like he pictures: we could eliminate diseases and disorders so that ever human born would be "normal." But if we did that, doesn't that take away from the diversity and wonder and magic of the human race? I certainly think so. So I, for one, am perfectly happy with the way we create our babies now.

I could go on and on. I found this whole reading experience to be a beautiful one, in light of the dreary world Huxley creates because I would never want to live in it. But it was realistic, and heart-wrenching, and so full of caution and wonder that I didn't want this reading experience to end. In fact, I marked so many passages Matt told me just to quote the whole book here for you all, but I can just tell you that if you haven't given this one a try, or gave up only 50 pages in, you must persevere. Its wonderful, it truly is. It was a great choice for the read-a-thon and my only regret is that I am going to wait until I am done with this whole list business before picking it up and reading it again, along with Huxley's other works.

"'But why is it prohibited?' asked the Savage. In the excitement of meeting a man who had read Shakespeare he had momentarily forgotten everything else.
The Controller shrugged his shoulders. 'Because it's old; that's the chief reason. We haven't any use for old things here.'
'Even when they're beautiful?'
'Particularly when they're beautiful. Beauty's attractive, and we don't want people to be attracted by old things. We want them to like new ones,'" (219).
Posted by Allie at 11:30 AM