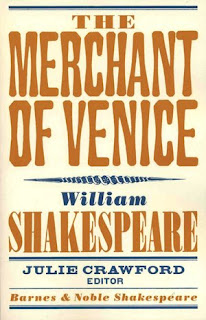 “All that glitters is not gold; Often have you heard that told: Many a man his life has sold But my outside to behold: Gilded tombs do worms enfold Had you been as wise as bold, Your in limbs, in judgment old, Your answer had not been in'scroll'd Fare you well: your suit is cold.' Cold, indeed, and labour lost: Then, farewell, heat and welcome, frost!”
The Merchant of Venice is yet another Shakespearean play that I was unfamiliar with. Unlike some of the others that I read for the first time, I really knew nothing about the play before I started. I was surprised to get into the play and see what it was about.

The play focuses on the "merchant" only slightly, which is what confused me. For being the title character in the play, the merchant, Antonio, does not appear to be the central focus on the play.

Basically, the play starts with a young man, Bassanio, asking Antonio for money. Antonio agrees to sign for a loan from Shylock, a wealthy Jew, to help Bassanio have the opportunity to go and woo his love Portia. Shylock has it out for Antonio, so part of the terms of this loan is that if Antonio fails to pay it back, Shylock can take a pound of flesh from the merchant.

After the loan is in place, Bassanio travels to Portia to win her. There are, of course, some other suitors, who all fail miserably at the test put in place to "win" dear Portia. I was a little amused at the test and found it interesting that her future husband would be determined by his ability to figure out a riddle. If my own father left that kind of a trap for my future suitors, I would have had a fit. It all seems to work out, as Bassanio manages to figure out and he wins dear Portia.

Meanwhile, poor Antonio is in a bit of a bind back home. His ships haven't returned, and lo and behold! No money to pay back Shylock!

This is where the play gets really interesting. I had to reread the last couple of Acts a few times because I was pretty enthralled with events and how Shylock was portrayed. As a Jewish character, Shylock was shown as a dark and mischievous fellow-only concerned with his money and revenge. And Shakespeare really portrays him as being that way. I'm aware that a lot of Jewish characters in literature are portrayed that way. In fact, I was reminded of Fagin from Dickens' Oliver Twist. In both Shakespeare and Dickens' work, the Jewish characters were portrayed in this slimy, disgusting way. Obviously in today's day and age, that kind of..antisemitism is inappropriate and offensive. But, you can't help but be a pit in awe of how these characters appear. I was particularly struck by these lines by Shylock...

Interesting, right? I also have to point out that this speech is in prose, which Shakespeare usually leaves to those of the lower classes in his plays. I had to think a lot about what Shakespeare was really trying to say here. On one hand, you have a character being portrayed in a dark light-he is obsessed with revenge, is shown as being a lower class, and is constantly being called out for being a Jew. On the other hand, he says things like this. He appears to be a sympathetic character. This side makes sense to my 21st century mind, but what kind of impact did his speech have on those who first saw the play performed? Did they question the right for a Jewish character to speak this way? Did it hit home for any of them? I wonder.

I also love that Portia seemed to hold a lot of power in the end of the play. Again, there was a bit of cross-dressing and Portia winds up at the trial to determine the fate of poor Antonio and Shylock. This scene was by far the most interesting-to see how words were twisted to get a desirable result. This whole scene helped show how the play really focuses on the power of language. One bit of intent left out of speech and everything can come crashing down.

I particularly fell in love with Portia's "mercy" speech...

“The quality of mercy is not strain'd, It droppeth as the gentle rain from heaven Upon the place beneath: it is twice blest; It blesseth him that gives and him that takes: 'Tis mightiest in the mightiest: it becomes The throned monarch better than his crown; His sceptre shows the force of temporal power, The attribute to awe and majesty, Wherein doth sit the dread and fear of kings; But mercy is above this sceptred sway; It is enthroned in the hearts of kings, It is an attribute to God himself; And earthly power doth then show likest God's When mercy seasons justice.”

Lovely, isn't it? No wonder it is one of the most famous bits from the play.

I could go on, but I feel I would talk in circles. This is definitely one I am going to return to sooner rather than later. There is so much to explore and question. :)
Posted by Allie at 8:30 AM