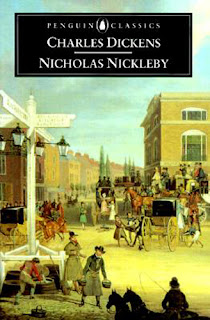 “Dreams are the bright creatures of poem and legend, who sport on earth in the night season, and melt away in the first beam of the sun, which lights grim care and stern reality on their daily pilgrimage through the world," (150).

I am just around 200 pages into Nicholas Nickleby by Charles Dickens. I'm surprised at how quickly this one is going, considering it took me awhile to hit the same page number in David Copperfield, and this one is longer! But, there seems a be a drastic different in style between the two. This one appears "lighter" in tone, so perhaps that is why the pages seem to be flying by.

I'm going to be honest and say that in comparison to the other Dickens novels on my list, I know relatively nothing about this one beyond the fact that it was Dickens' third novel and that it is supposed to be funny. I rather like not knowing what's going to happen, or what his purpose is. Instead, I can "sit back" and enjoy the language and story.

The novel begins with two brothers. One, Ralph, gambles with his inheritance money and makes a fortune. His brother, the older Nicholas, marries, has two kids, and settles on his farm. When he passes, he leaves his wife and kids poor with no where to turn. In desperation, they turn to Ralph for help.

Ralph is a funny...and rather bitter old man. He agrees to help his relatives by pushing them off into the first situations he finds for them. For the son, Nicholas, they go to answer an advertisement in the paper for a teacher's assistant. They arrive to find a lovely fellow named Wackford Squeers. Now, just judging by that name you know that Nicholas is in for a treat, right? HA.

Nicholas travels with Squeers to his home and school 250 miles from London. The boys in the school are thin, wearing patched and ragged clothing, and freezing from lack of proper bedding and warmth. It is clear to Nicholas that they are mistreated and Squeers is a tyrant, but what can a guy in his situation really do? His descriptions of the boys were pretty heart-wrenching;

"There were little faces which should have been handsome, darkened with the scowl of sullen dogged suffering; there was childhood with the light of its eye quenched, its beauty gone, and its helplessness alone remaining; there were vicious-faced boys brooding, with leaden eyes, like malefactors in a jail; and there were young creatures on whom the sins of their frail parents had descended, weeping even for the mercenary nurses they had known, and lonesome even in their loneliness," (97).

The other descriptions of the beatings and meal times were equally as painful (the boys lined up for breakfast to have a wooden spoonful of food shoved in their mouths before getting a measly bowl of porridge). At first I wasn't sure what Nicholas was going to do to combat that pain, but after befriending an orphan named Smike, it seems obvious that he will eventually fight back. Which he did in heroic fashion, beating the crap out of Squeers and running away.

As for Nicholas' sister, Ralph Nickleby found her a place in a milliner's shop, but the narrative switched before I could see what happened to her.

Already 200 pages in, I know that I am going to enjoy this one. While it may not have the same depth or complexity as David Copperfield, it does seem to be touching on some similar themes-self-preservation, reliance, and making a path in a world set against your own success. There are also quite a few characters, just as in David Copperfield. The characters are all unique and crazy, with their own individual quirks. I'm looking forward to seeing where this one leads, and whether I will rank it as highly as David Copperfield.
Posted by Allie at 8:15 AM