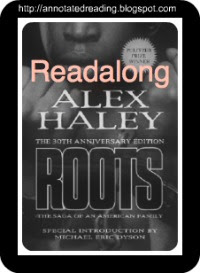 Welcome to post 2 of 4 for the Roots readalong hosted by Christina at Reading Thru the Nite. Last week we all posted about the first thirty chapters of this chunky book, so this time we are talking about the next 30. You can read my thoughts on the first part here.

I actually started reading the second portion of the novel immediately after writing and scheduling the post for the first part. I was hooked on the novel and needed to know what happened to Kunta Kinte. It seemed almost perfect that the first portion of the novel focused solely on his life in Africa. It gave me, as the reader, the opportunity to fully understand and appreciate what Kunta left when he was captured.

I didn't have long to wait in my reading to have the mood and the tone of the whole novel change. While I knew that Kunta would be captured and sent over to America to be a slave, I was surprised by how quickly it happened and how everything changed. I'm aware that having everything change completely was what happened when someone was captured, but it took my breath away. I actually couldn't even stop myself from turning pages until 100 pages later in the narrative.

Two chapters into this section, Kunta is alone in the woods searching for wood to make a drum when he is captured. It was just as horrific as you could imagine. He was shackled and abused, branded with hot iron in the middle of his back. He is beaten, repeatedly, and whipped so that blood runs from his back.

It gets worse when he finds himself on the boat, shackled to a strange man from another tribe, without any knowledge of what's going on or where he is going.

Their time on the ship was actually hard for me to read. In my last year of college, I had to take a few summer courses to wrap things up. One of those courses was a class in African-American Woman's history. For the course, we had to travel to the Charles H. Wright Museum in Detroit. In the museum, there was a section created to look and feel like a slave ship. You could see how dark it was, with men lying so close together on rough boards, with no room to sit up. It was the most significant part of that class. For so long I heard about what it was like from history textbooks, but to see it? It changed everything.

And as intense as that experience was in the museum, multiply what Haley has written in this portion of Roots. The description and heartache of Kunta's journey on the slaving ship was simply powerful. Reading descriptions of men crying, voiding their bowels where they lay, then having food served in the same place...horrifying. But the scrubbing of raw sores, the whippings and rape of the women, as well as the complete lack of compassion...wow. I was completely hooked on what Haley was writing. It truly gripped me. I felt for all of those men.

They eventually reach America and the men are sold. Kunta is brought home and immediately tries to escape...and he tries again and again. Eventually on his fourth try, his captors give him the option of either losing have his foot or being castrated. He chooses to lose part of his foot, and they immediately take an ax to it. Kunta is then sold to his master's brother, where he is treated far better. He receives care from a woman named Bell while he recuperates from his foot injury. Once it is mostly healed, he is given crutches and the job of gardener. The other slaves are slow to warm and Kunta repeatedly battles his own inner struggles to understand why these other blacks have given up who they are.

A few of the men start to befriend Kunta, and he eventually becomes his master's driver. This whole period of time also takes the reader through the Americna Revolution, as the slaves gather information from what they overhear. This big section leaves off with Kunta discovering another African-someone he can communicate with-at the very end and twenty years from the time he first landed in America.

I really took a lot from this part of the book. The descriptions of his capture, the voyage, etc were all heart-breaking and took that 100 pages of reading without a break. There was the same attention to detail in this section as the first. Once Kunta was in America, I think the confusion between who he was and what he was becoming was done perfectly. He was constantly at odds with those around him and was often angry at those who seemed to forget who they were and where they came from. He always swore to not become complacent, but by the end of this section, it appears that he has settled into his life as a slave.

Moving forward, I am curious to see where Kunta's narrative ends-what choices he will make and when he'll finally realize that Bell is right in front of him. :) To say that I am addicted to this novel is an understatement. I can see why this novel had such an impact and why it has endured. Let's just hope the second half lives up to the power of the first.
Posted by Allie at 8:00 AM