I've had this post sitting in draft form ever since Trisha tagged me back on the 10th. I was hoping it would write itself, but I decided to play along, finish it, and make the rest of you suffer. :)

The idea is that Trisha made up eleven (hard) questions that I have to answer. When I'm finished, I create 11 more and tag a bunch of you to do this. So, here are the questions she gave me and my answers.

QUESTIONS
1. What is your favorite piece of art?
Well, if I have to go with a well-known piece, I'll choose the following by Van Gogh: 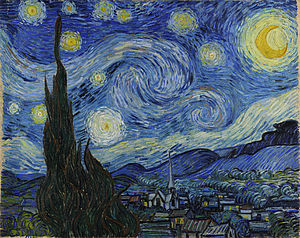 Obviously it is Starry Night. LOVE this painting!

I also really love the sculptures my boss at the park does. He got into marble sculpting a few years ago, and every summer he journeys out to Colorado to sculpt for a few weeks. Waiting for him to come back to see what he comes up with each year is amazing. He also works with bronze-casting pieces. I think he's amazing. Here are two of my favorite pieces he's done: 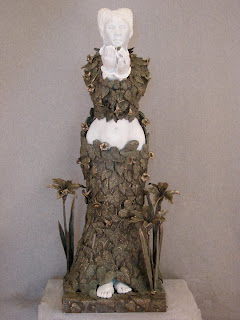 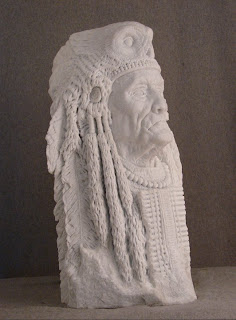 2. What literary character do you think would make an awesome world leader?
Uhhhhh...this question is super hard! I have no idea...someone with more a clue than I have. :)

3. What color do you think should be outlawed from clothing?
Magenta. I just don't think it's flattering on anyone. At all. WAY TOO BRIGHT and just...ugh.

4. Hats. Yes or no?
My husband wears a hat almost non-stop. And not anything awesome like a fedora or top hat...he wears baseball hats. When we tackled his closet the other day, we counted and he has 30+ hats. Ridiculous.

I don't mind hats though. I would love to traipse around in a bonnet. :)

5. What contemporary novel should be added to the high school curriculum?
I would give anything to teach The Book Thief. I think it is a wonderful book that addresses a lot of issues that come up in curriculum. And it is a great cross-curricular piece.

(I also would have said The Hunger Games, but hey! I'm teaching it this spring!)

6. What book featuring real people do you think could work if the characters were switched to animals?

Let's turn The Odyssey into animal characters for kicks. :) OHHH! Or Macbeth! I would read that, for sure.

I don't mind books with animal characters, but I don't think I would really want to change any of my favorites.

7. Genetically designed humans. Hell yes or absolutely not?
Well...no. I think that's a horrible idea. I get pictures from Anderson's book Feed in my head-where the grotesque becomes something to be desired because being genetically modified is okay. And it isn't.

8. What book would you like to see get parodied a la Pride and Prejudice and Zombies?

None because it makes me sad.

But I would love to see those writers tackle Mrs. Dalloway and add zombies. THAT I would read. :)

9. What book would you absolutely hate to see get parodied?
Anything that I love? I think that if they went after Eliot or Wharton I would have a fit. Or anything that's a little more serious in tone. Just don't even go there!

That being said, I haven't read any of the parodies. Maybe they're funny?

10. TV. Awesome source of entertainment or horrifying time suck?
Definitely a time suck, but also entertaining. I'm trying to reduce how much I watch TV because, well, it's cutting into my reading time. There are certain shows I will never abandon though!

11. What literary character should immediately jump off the page and into your bed?
Snape. I LOVE me some Snape. But only if it is Alan Rickman playing Snape.

Okay, now I am supposed to come up with my own 11 and tag a bunch of you, but because I am party pooper, I'm tagging everyone who hasn't done this and YOU HAVE TO answer the same questions I did. HAHA!
Posted by Allie at 3:05 PM