Book 137: Dickens is winning me over. 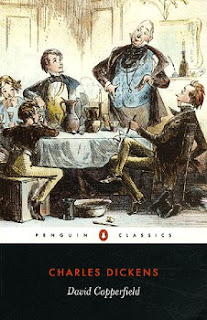 "Whether I shall turn out to be the hero of my own life, or whether that station will be held by anybody else, these pages must show," (5).

And so begins David Copperfield, my next foray into Dickens' writing. As I mentioned in my intro post, I haven't had the best experiences with reading his work (due to an extremely negative read of Great Expectations in high school), but I thought I would love this one.

Turns out, I am. There is something about his writing in this novel that has completely drawn me in. I don't know if it is because this is a more autobiographical piece that I admire the writing more, or if it is because I am working hard to appreciate the subtleties of his writing. Perhaps I am just developing a tolerance for his work. Or maybe, just maybe, it is because I am finally letting go of my negative impressions of Dickens and just letting the work speak for itself. Considering that the Victorians may be my favorite era, I should love Dickens! I am getting there.

It also might be that I find young David Copperfield to be a far more interesting and relate-able character than Pip (Great Expectations) or Oliver (Oliver Twist). From that first line I mentioned above, I care about him. I want young David to succeed and thrive in a world where the odds are against him.

David is born to Clara Copperfield, a young widow who seems quite naive and unsure of her own status in life. David's great-aunt, Betsy Trotwood, abandons them both the night of David's birth when she learns he is a boy. This means that David only has his mother and nurse Pegotty to raise him into a strong man. It is clear from this kind of beginning that David will struggle.

He seems to lead a very happy albeit sheltered life. He has close relationships to both women and seems to flourish under their care...until his mother is wooed by the nasty Mr. Murdstone.

This is where I felt my heart start to truly feel for David. His mother, young and blinded by her love for Mr. Murdstone, agrees to marry the jerk. Once married, Mr. Murdstone and his sister, Miss Murdstone, rule with an iron fist. They make the rules and decisions in the once happy household. They refuse to take clara's feelings and ideas into account and soon alienate poor David from his mother. Soon, David begins to feel neglected, cut off from his mother.

You have to sympathize with him, and this is truly the place where Dickens succeeds! By making Murdstone so despicable, David immediately becomes likable. I hate Mr. Murdstone right along with him! I also want to lash out and when David eventually snaps and bites Murdstone when provoked, all I could feel was a sense of justice.

Until David is sent away to Salem House, a school, after the incident. Away from home, David isn't there when his mother falls ill and eventually dies. Then he is at the mercy of those awful people. What a horrible kind of existence-to know that your future lies in the hands of two people who hate you!

So why did I sympathize so much with David and not with Pip or Oliver? Unlike the other 2 protagnonists, David feels real. He doesn't have the same whiny characteristics as Pip. And he isn't so achingly...Oliver. No, David seems to accept his lot in life. When things happen to him, he acts genuine and accepting. There aren't fake tears or complaints, but an acceptance that these things are meant to happen. He seems stronger than the other two, and while he may lack a little confidence, he continues to try to be better. That is why I love him so. And that is certainly the mark of a great writer-to make me care about a fictional little boy.

I know that Dickens is known for his characters, but this novel far outshines the others that I've read. Beyond David, there are countless others worth mentioning, but I want to read more before I say anyting about them. I am curious to see where David goes from this point in life-orphaned and in the care of despicable people. I wonder whether he'll succeed as I want him to. And I suppose I'll find out soon enough.

"The mother who lay in the grave was the mother of my infancy; the little creature in her arms was myself, as I had once been, hushed forever on her bosom," (115).
Posted by Allie at 12:00 PM