Thoughts on Night by Elie Wiesel. 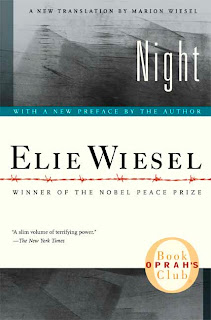 “To forget the dead would be akin to killing them a second time.”

I'm taking a short break from my other reading this week to read a couple of the books I'm going to be teaching starting on Monday. And while I won't be doing a lot with Night, I will be finishing up the discussion and having the kids write a paper about the book. Since it has been a few years since reading it, I knew it would be in my best interests to read it.

I sat down last night, rather late, to read a few pages before bed. And, like many other books, I was sucked into the story. Since the book is short, I managed to finish it before bed. Then I was up a little too late thinking about what I had read.

It reminded me a bit of something Matt and I had watched on TV a couple weeks ago. There was a Band of Brothers marathon on, so we snuggled into the couch to watch (the series is about a group of soldiers during World War II). Matt had seen the whole series before, but I had only seen 1 or 2 episodes. Anyway, there is an episode where the soldiers discover a camp, and those images were hard to watch. While my brain knew that they were actors and that they were pretending to be in such misery, a very real part of myself only saw the people on screen as those who really suffered during World War II.

As someone who has taught U.S. history, and who hopes to teach a history course again in the future, I always struggle with how to approach talking about the Holocaust with students. One of the things that I always push for as a teacher is the complete understanding of what history means for us today-that we learn about history to prevent those same tragedies in the future. I always want my kids to feel that and to acknowledge that we do have a dark past.

But with the Holocaust, I just try and show them. I wish I would have known about that Band of Brothers episode last year. I think seeing it would have changed a lot of my students' minds about the death camps. And I also wish they had the opportunity to read an account as honest and as open as Wiesel's Night. I do believe that reading an account makes it come alive. 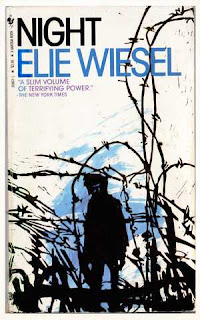 What is special about Wiesel's book is that it is not just about his experiences in the camps. It is also about being human in a time where he was treated like an animal. The narrative is simple in that it never bogs down in language. Instead, Wiesel simply explains what happened to his family, how he felt, and what it meant to lose hope in everything.

I think that this approach is what makes his book so powerful. It is about his family-how they are broken apart. He never has the chance to say goodbye to his mother and younger sister. Instead, they are sorted and taken away from each other without a chance to speak a word. Elie, a young teenager, has to face the horrors of this world alone, since his father seems to disappear into himself from the beginning.

One of the most disturbing scenes is near the beginning-when they arrive at the camp. They are walking and Wiesel describes pits of fire where soldiers are tossing children and babies. Worried that they will also be tossed into the flames, Wiesel writes,


"I told him that I did not believe that they could burn people in our age, that humanity would never tolerate it . . ."

That line says a lot about the horrors of the camps and the feelings of disbelief that those sent to be in the camps must have felt. When I tried to close my own eyes last night, I also tried to picture what that must have been like. Denial must have been one of the only ways to cope with that kind of image.

Night is definitely a book worth discussing. Being that it comes from Wiesel's memories, it's powerful. It doesn't gloss over what happened in the many camps in Nazi Germany, but it explains how those captured lost their sense of self. Under the shadow of the chimneys and crematoriums, it was just a fight until the next meal.

I think Wiesel says it best...