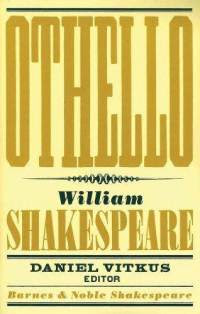 “Reputation is an idle and most false imposition; oft got without merit, and lost without deserving."

Othello is the last of the "great" Shakespearean tragedies that I've read (those tragedies include Hamlet, King Lear, Macbeth, and Romeo and Juliet). I knew I wanted to end my reading of the tragedies with this one because I knew I would love it. It is a play that is often talked about, and I have been lucky not to have it spoiled for me.

Like The Merchant of Venice, I read it without doing research beforehand. I think the fact that I understood it and knew what was going on speaks to how reading so many plays has helped my knowledge of Shakespeare's sentence structure. It also kept up a bit of mystery as I read, as I didn't know what would happen.

I am glad that I saved it, and that I finally read it since it is a play that is part of the curriculum for the district I have been working in. It was about time that I read it!

Anyway, the play is about Othello, a Moor from Africa who has become one of the greatest generals in Venice. By the end of the play, he has a huge downfall. At the beginning of the play, everything seems to be going wonderfully for Othello. Beyond his military accomplishments, he recently married Desdemona. There is a bit of hoopla about the marriage because of the difference in their races, but Othello and Desdemona seem happy at the beginning.

Of course, it all spirals down from there. Othello has to choose a new lieutenant and selects his friend Cassio over Iago. This pisses of Iago, who determines to bring Othello down from his lofty perch. Iago is really the mastermind behind all of the tragedy in the play, as he is determined to seek revenge on both Othello and Cassio.

All of these little details wind together-the race issue especially. Since Othello is black, he subjected to a lot of racism, especially given Desdemona's own color. There are many comments throughout the play that focus on the color of Othello's skin and his relationship with Desdemona. Some of these are incredibly sexual and conniving (and most are said by Iago). 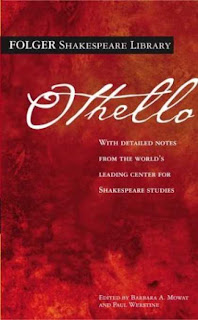 Where it all falls apart is when Iago convinces Othello that Desdemona and Cassio are sleeping together. Othello turns into a madman, agonizing over what he thinks is happening. What really struck me about this change was that Othello took Iago's word over anything Desdemona had to say. It seemed as if he didn't care to learn the truth from Cassio or Desdemona before condemning them for their transgressions.

In the end, it all ends in murder and suicide (Shakespeare was a fan of suicides it appears).

This play? Fantastic. I was blown away by the power and evilness of Iago. He might be the best Shakespearean villain. Every move was calculated and he truly used the circumstances of Othello's life and appearance to his advantage. He knew every weakness, the racism, and the insecurity against Othello to bring him down from his lofty heights.

Now I see why this play is the perfect choice for high schoolers. As I was reading, I continually thought of ways to discuss the major issues here: prejudice, the importance of reputations, and learning the full story before acting on information. And while I still think there are better Shakespearean tragedies, this really is a great choice for high school students. There is so much here to discuss.

A bit of me is sad that this is the last of the big tragedies-those most well-known and read-but I am excited to get to the smaller ones in the future and see what other kinds of torture Shakespeare wants to inflict on his characters.

“I hold my peace, sir? no;
No, I will speak as liberal as the north;
Let heaven and men and devils, let them all,
All, all, cry shame against me, yet I'll speak.”