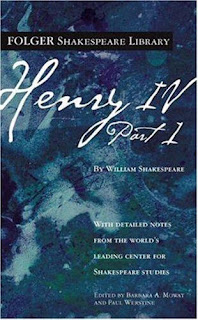 “I know you all, and will awhile uphold The unyoked humour of your idleness."

I decided, for my own sanity, to discuss both of the Henry IV plays together in one post. Part of that is because they closely relate (as is obvious by the titles), but also because I don't have much to say about the second.

I've read Henry IV Part I  before in college, and it was one of the plays I wrote about for my final. Obviously I enjoyed the play then, and I still do. It had been 5 or 6 years since that Shakespeare class, so I was pumped to jump back into a play that I really loved.

It is easy to see why Henry IV Part I has the reputation it does. It is a fantastic play full of intrigue and really likable characters. Just as before, I really loved the characters of Prince Hal and Falstaff. Hal is a bit of a mischievous lad-not really sure of his role as Prince and what he "should" be doing. Falstaff is an older man who "guides" Hal in all things that are not princely. He is a bit of a scoundrel and plays the "fool" role in this play (almost all of Shakespeare's plays have a fool of some sort-someone to lighten the mood, point things out to the audience, and provide an opportunity for Shakespeare to explain things to his audience). I believe that when I wrote about the play before, I really focused on the relationship between Hal and Falstaff. They're funny and interesting.

This time I was also really struck by Hotspur-now HE was a dynamic and interesting character. :) What I also noticed on this read was how uninterested I was in Henry IV. While he was obviously a very important part of the play (and all the battles and what not), I was more interested in comparing Hal and Hotspur. I liked how Hal seemed to be growing up a bit (unlike Falstaff), and Hotspur was sassy and on fire. The King just paled in comparison. 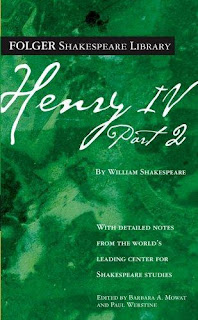 Considering I loved Part I, I was really excited to read Henry IV Part II, especially since I hadn't read it before. Part I ends on a bit of a cliffhanger (well, the main "problem" was killed off and it ends in the middle of a war...), so I was expecting Part II to kind of...go with it.

I was a bit disappointed. It didn't have the same charm and power as part I, so I finished it being not as impressed as I was with the first part. I was still drawn to Hal and his growing maturity. I definitely think that this second part really showed a coming of age part of Hal as he accepted more responsibility.

That comes from Hal growing apart from Falstaff and striking out on his own. What made me love Part I was the interaction between those two characters...they only interacted a couple of times in Part II. Sad. It also lacked the humor that the first part had, which is something I really enjoyed.

Overall, I felt like Shakespeare was writing a bit of a "filler" play to bridge the gap between Part I and Henry V. This second one lacked everything I loved in the first and just let me down. It didn't seem to have that much of a plot, but just a further continuation of Hap growing up and away from Falstaff. I'm not sure that warranted its own play.

What did you think of these two?
Posted by Allie at 8:00 AM