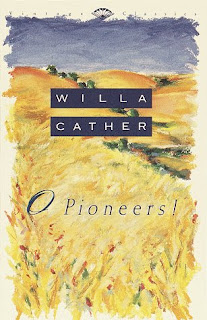 I think it might be official. Willa Cather is totally one of my girls now. I fell in love. And I feel guilty because when Mrs. P was trying to get my little ninth grade self to understand the beauty of Cather's language, I may have mentally told her some things that I cannot repeat here (sorry Mom).

Yes, I have fallen in love. And even though the story might not have been the strongest, the language and the beauty of Cather's writing totally made up for it. This slim little novel sucked me in and wouldn't let me escape. So yes, I am a Cather fan through and through and now I cannot wait to go and read My Antonia so that I can offer apologies to Mrs. P for doubting its excellence.

The beauty of O Pioneers is in its simplicity. The story begins uncomplicated and seems to remain so until the climax. Even with that issue, the book and characters remain simple and pure. I love that.

I also loved that this offered a snapshot of life in America at this time. Being the huge history nerd that I am (I do have a history degree), I can appreciate this representation of American life on the frontier. With the passage of the Homestead Act, so many individuals strove to become successful as farmers and to own their own land. For those who came from Europe, this was the chance to make a life for themselves and to own their own property. So when Cather says,

"The history of every country begins in the heart of a man or a woman," (35)

you know she is speaking the truth. The United States grew on the backs of dedicated men and women who were striving for new lives and success.

And I love that Cather captured this. This novel truly is a representation of the American frontier.

I also wanted to share a few of my other favorite lines. Like I said before, Cather has a gift with language. She has the ability to say exactly what she means in a very simple way. I wish I had that ability.

"'There are only two or three human stories, and they go on repeating themselves as fiercely as if they had never happened before; like the larks in this country, that have been singing the same five notes over for thousands of years,'" (63).

"'I like trees because they seem more resigned to the way they have to live than other things do,'" (78).

I can truly appreciate that language and the images it provokes.

I need to also say before I close out this entry that I read this novel in part for the LOST books challenge. As part of that challenge, I am supposed to draw comparisons between the book and TV show. However, I had a really hard time making any connections other than the characters' names: Alexandra and Carl. I even talked it over with Matt and he had nothing else to offer as well. I suppose I could attempt to draw comparisons between all of the characters and the idea of being on a frontier, as the island is a new place to many of them, but that seems so shallow I won't develop it.