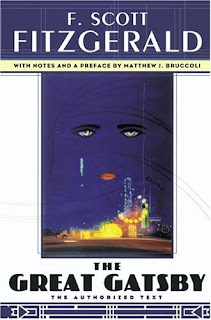 I absolutely adore The Great Gatsby. It is one of those books that I simply love because it is so truly itself. For me, there is nothing else that can compare to the world of Gatsby, Daisy, and Nick.

It is a world where everything should be wonderful. Gatsby is rich and successful, with a home filled with the latest and greatest. He has grand parties that are the talk of the area, while still maintaining an aura of mystery. Nick is the up and coming new man in town, who is trying to make a name for himself. Daisy is the beautiful and seemingly unattainable girl from America's heartland who also seems to have everything she could desire.

But their world is just a charade. Even with money, grand houses, and beautiful cars, these people really have nothing. They don't have happiness and their lives are unfulfilled.

This certainly is a novel that truly explores the meaning of the American Dream.

Probably the most well-known part of the novel is the "green light" and its symbolism. Here is the passage I am talking about:

"The silhouette of a moving cat wavered across the moonlight and turning my head to watch it I saw that I was not alone-fifty feet away a figure had emerged from the shadow of my neighbor's mansion and was standing with his hands in his pockets regarding the silver pepper of the stars. Something in his leisurely movements and the secure position of his feet upon the lawn suggested that it was Mr. Gatsby himself, come out to determine what share was his of our local heavens.

I decided to call to him. Miss Baker had mentioned him at dinner, and that would so for an introduction. But I didn't call to him for he gave a sudden intimation that was content to be alone-he stretched his arms toward the dark water in a curious way, and far as I was from him I would have sworn he was trembling. Involuntarily I glanced seaward-and distinguished nothing except a single green light, minute and far away, that might have been the end of a dock. When I looked once more for Gatsby he had vanished, and I was alone again in the unquiet darkness," (25-26).

That passage is probably one of the most discussed passages in high school English classes. I remember discussing it in my own class. We were all frustrated because we just didn't get it. What WAS the green light? As our teacher tried over and over again to explain the meaning and symbolism of the green light, we just grew more and more frustrated.

It has taken quite a few rereads and an enlightening conversation in a teaching methods class for me to really understand.

I think that when we are younger, we believe that every dream we have has the possibility to come true. We are nurtured from a young age to believe that any dream we have is possible and attainable if we work hard enough and try. But as we get older, that doesn't end up being the case. I recall a time where I slaved over a short story to enter in a contest my first semester of college. I worked hard and tried and felt my story was simply amazing and full of beauty. Imagine my surprise when I didn't even place. Didn't those judges see my hard work and effort?

Or we could go as recently as this last summer. As I went from school to school interviewing for teaching jobs, I felt I had a solid base beneath me. I had spent 8 months the previous school year long-term subbing, which I felt was a valuable experience. I had a huge portfolio full of my accomplishments as well as my students', which I was sure would wow my interviewers. Imagine my surprise when every school called to say, "We're sorry, but we don't think that you are a good fit for us."

It has been a lesson to myself that even with hard work, effort, and tears, I don't always get what I want. But I can keep trying and something better will hopefully come along. And it has only been with these kinds of life experiences that I can come to understand that symbolism of the green light.

It doesn't represent Gatsby's desire for Daisy. Instead, it his intense need for every wish of his to come true that calls him to spread his arms wide in hopes that he will someday be worthy of receiving his every wish. For Gatsby has worked hard to up his status and prove himself to be a man worthy of love, adoration, and respect, and even after he seemingly "Gets" Daisy, he still doesn't have everything. At the heart of it all, Gatsby is still alone and unfulfilled.

Gatsby is chasing his happiness without realizing that by chasing it, he will never get it. Just as I chased schools down looking for the perfect teaching position, Gatsby fails to see that when it is the right moment, it will all land in his lap.

We cannot try and attain everything because then we will never learn to love and appreciate what we have. That image of Gatsby reaching for something that he might never get is something that has become ingrained in my own mind. He has been searching and trying for so long you hope that the light will fly into his arms and everything will be okay. But life doesn't work that way.

I truly believe that when I was in that high school class I simply didn't have enough life experience to truly appreciate and love what Fitzgerald was trying to tell me. It is an important life lesson, and one that I understand now. To me, this just shows that there is a time and a moment for everything I read. Some lessons I cannot learn at certain points in my life, or I cannot understand the depth of what these authors are trying to teach me.

And I am glad that Fitzgerald has told me that while I do have a green light out in the distance, it is best not to yearn for it, or chase it, but to live my life now in the moment, and hope that one day that light will come to me instead.
Posted by Allie at 9:30 AM