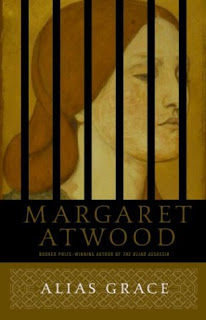 I forgot how good Margaret Atwood is at developing her characters and plotline. She manages to not only deliver a moving and touching story, but does so with every intention of creating characters that are memorable.

I suppose you aren't supposed to genuinely like Grace Marks. As a historical figure, she was a convicted murderess. At the time, she was written about as a conniving woman who was well-aware of what she was doing when she partnered up with McDermott to murder her master and the housekeeper.

However, Atwood slowly draws the reader in to Grace's story. Through the guise of a doctor studying Grace's history, Atwood allows us to get to know Grace from the moment she can first remember, all the way to the day of the murder and beyond. In Grace's words, we learn about her life.

Atwood does it slowly. We learn about her childhood in Ireland and the plight of her family. We learn that her father was an alcoholic and her mother sickly. We join them on the boat as they come over to Canada, and the tragedy that seems to follow them everywhere. We watch as Grace is attacked by those around her who are pretending to help her. She tells us how she earns a place in a good home as a servant and befriends a girl named Mary Whitney. We then learn about Whitney's demise and how Grace ended up at Kinnear's farm, where 2 weeks later she committed murder with McDermott at the age of 16.

Atwood takes us slowly so that we can understand Grace, and love her and she loves herself. The doctor who is studying her in the novel, Dr. Simon Jordan, also falls in love with her and forgets that he is supposed to remain apart from Grace's narrative. It reminds us, the readers, that we too need to step away.

While I know that much of this is fictionalized, I cannot help but feel for Grace as a person. Whether or not she actually committed the murders is still a question that will remain without an answer. And while Atwood is trying to give us the details of the story, you cannot help but wonder-did she really do it?

I think Grace seems to say it best in the novel, so I will leave it to Atwood:

"When you are in the middle of a story it isn't a story at all, but only a confusion; a dark roaring, a blindness, a wreckage of shattered glass and splintered wood; like a house in a whirlwind, or else a boat crushed by the icebergs or swept over the rapids, and all aboard powerless to stop it. It's only afterwards that it becomes anything like a story at all. When you are telling it, to yourself or someone else," (298).
Posted by Allie at 9:00 AM