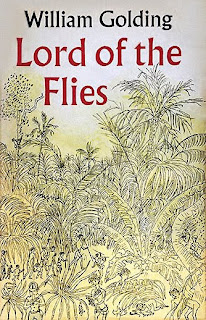 If I told you that I had to make myself finish this book would you hate me?

I really tried to read it with an open mind...and not get angry or upset by the horrid writing, and the confusing narrative, but I still just don't like it.

I can "Get" why it is taught so often, and why it is an important piece of literature. And by all means, I should have liked it since I usually like novels like this. But I found it to be boring. And when the tragedies and violence finally struck, I wasn't even moved by it.

It was more of a "that sucks" kind of reaction.

But I tried, I really did. I attempted to like the characters, but the only ones I enjoyed were Piggy and Simon. They were the only two with any sense and the only two I didn't cringe at when they spoke.

So yeah. You could say I am not a fan of Golding's masterpiece. It happens and there is no harm done.

I will say that I liked the idea of the book. A group of schoolboys alone on an island and forced to survive. Kids will obviously handle such a tragedy different than adults will, so it was interesting to see how they tried to set up leadership and what their priorities were for survival.

As I pointed out before I began the book, I read this in part for the LOST Books Challenge and yes, there were a ton of similarities:
There is more, but those are the biggies.

Anyway, I'm glad to be done with this and not have it hanging over my head any longer. On to something more interesting....


*I'm sorry about the "downer" way this post seems. I just really didn't enjoy the book and I really just don't enjoy writing about it. It happens and I hope to have better things to say about my next book.*
Posted by Allie at 4:00 PM