Book 45: On Racism and History. 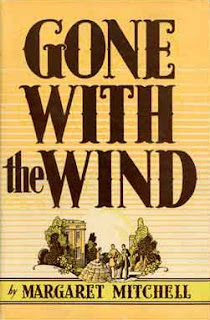 Well. To say that I am flying through this behemoth of a book would be an understatement. We could say that I am devouring it as I do ice cream, or that I am inhaling it as if I were at the top of Mt. Everest lacking air.

Yes, I am flying through this. I was worried before I began it that this book was going to irritate me. I thought that the author would take liberties with her history, and as someone who has a history degree and knows a lot more than the average person about the Civil War, well, I was worried. But, I am surprised to see that Mitchell does a fair job of keeping things fairly accurate, while giving a great, fictionalized account of the South during the Civil War.

I can see now why many in the South saw this book as their response to Uncle Tom's Cabin (which I read back in college and I am looking forward to reading again). It gives a different view of plantation life and the stance of blacks who were slaves.

The fact that Mitchell makes it clear that there were some plantation owners who treated their slaves more fairly and equally is admirable. But those plantations owners were few and far between. A very, very large majority of slave owners in the South were abusive and not at all like the O'Haras and some of their wealthy neighbors.

You also have to love the fashion descriptions. I mean, I would LOVE to wear those big elegant dresses, corsets and all, if they came back in fashion. And I know I am not the only one.

As for the war events and the plight of those left behind on the farms and plantations in the south when the men went off to fight, well, that's fairly accurate as well. The fact is, with no men left behind, the women and children (and slaves) had to do what they could to survive. When Scarlett crouches in a field and declares that she'll "never go hungry again," there is a lot of power in those words. The few farms and plantations that escaped Sherman's March to the Sea were in control of the Southern, or Northern army. There was NO food for the families left behind. The blockades prevented any food from being imported.

There is also a lot of accuracy when all of the young men around Scarlett's age die in battle. Where the North had a large population of young growing families, the South was smaller in population, and when their men died, they couldn't be replaced.

With all of that being said, Mitchell did a fine job of describing the conditions of those in the South in a believable way. I'm impressed, and of course, eating it all up.

Of course, there is one issue in the book and it is the one thing that a lot of readers find wrong with it. The book is blatantly racist. Now, whether Mitchell was a racist person and believed the things she wrote...well, I don't have the answer to that. And it is hard to say that the book would be better without the racist and degrading statements. If we were to correct it to make it politically correct by today's standards it would ruin all value and power of Mitchell's work in capturing the South as it was during the Civil War.

I don't condone racism, so take all of this that way. But personally, when I read a book such as this, where racism is used as a sign of the times in which the book was written, or as a way of capturing the time period, I have to let it go. Much like Mark Twain's the Adventures of Huckleberry Finn, the racism that is present in the book is what makes it so powerful to us, in this time period. I have to accept the book, and its racism, as a sign of the times in which it was written. And I have to keep in mind that it is clear the times have changed in that we don't find that kind of language acceptable today. I also know that these kinds of novels and writings have helped us capture history in a way that boring articles cannot convey.

For that, I have to love the novel as it is, racism or no. It adds to the depth and power of the book and without that element, it would be a far different book.

Anyway, I think I have rambled long enough on this topic, but be prepared for a long discussion of Miss Scarlett, of which I have a LOT to say.

But, before I leave, here is a question for you: Would you completely dismiss a novel or piece of writing just for its racist leanings? I'm curious!
Posted by Allie at 6:47 PM

Email ThisBlogThis!Share to TwitterShare to FacebookShare to Pinterest
Labels: Gone with the Wind, Margaret Mitchell