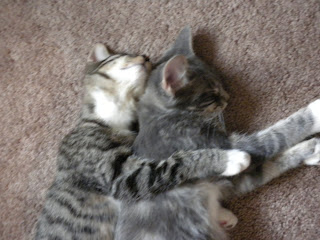 This has been yet another crazy week. I came out on Friday night absolutely exhausted from working 9 days in a row and having a few nights of restless sleep. I also was super busy on my two nights off dealing with the kittens we took in on Wednesday.

Both of them are adjusting well and seem to be bonding with both of our cats. Hemi, who is 3, was the last to come around. She really isn't a big fan of other animals on her turf, but she took to the kittens in only 2 days, which was a lot quicker than she did when we brought Sparty home. She is still a little wary, but its fun to watch her watching the kittens.

Sparty is in his glory. He is 6 months old now, so 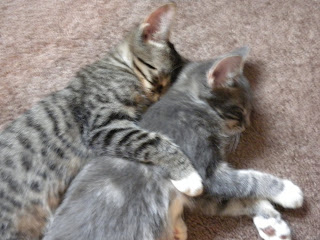 he almost full grown. But he is loving the fact that he has two new playmates to wrestle with and chase.

The first night the kittens were here was kind of horrible. Both of them were dehydrated and starving in addition to having fleas. Matt's sister Sarah, who is a vet tech, came over to check them out and confirmed that they were both girls. She helped me wash them and get rid of their fleas...which was a horrible experience. I have never felt so bad for an animal before. Especially the gray kitten, who was far more infested. 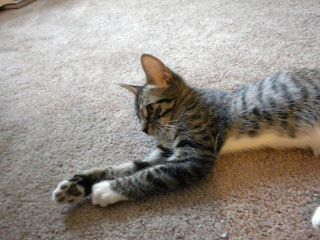 Since then, they have become more comfortable with us and even affectionate. However, when you reach out for one, they bolt, leading me to believe they were abused, which breaks my heart. But they are very comfortable with us now and love to cuddle.

The tiger looking one we have named "Lou," in honor of the guy who found her. Lou was originally going to keep her, but has asked us to find her a good home. She is super playful and pretty spunky. She actually reminds us a lot of Sparty when he was a little smaller. So, if you know of anyone in Southeast Michigan who would love to take her in, we are still looking for a good home for her!

The little gray one took my heart the moment I 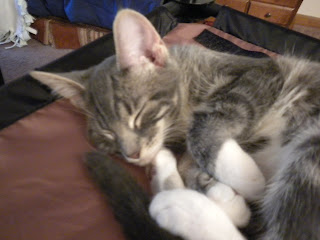 saw her, so we decided to keep her. After this, I don't think we can take in any more. And even though we love Lou just as much, we just can't keep both in our apartment.

I decided I wanted a literary name for her (to contrast Hemi and Sparty), and Matt shot down some of my other choices, so we decided on Lily, after the character Lily Bart in one of my all time favorite novels The House of Mirth by Edith Wharton. She is a super sweet little kitten and I am love with her adorable little face.

But no more pets until we have a bigger place!

Anyway, moving on from the kittens, I have been feeling super under the weather the last few days. I spend almost all day today, except going to see Toy Story 3, in bed sleeping. I haven't felt like doing much, so our apartment is a huge mess as well. I am hoping I am not seriously ill, but I think it might be mono. One of the girls at work came down with it a month ago and a week before that we shared a drink at the bar. I have some of the symptoms so I am waiting to see what happens.

In reading news, I didn't get much accomplished. I was having a hard time getting into a few of the books I was reading, so I gave up and went on to a Wharton novel the same night we decided to keep Lily. I'm in the middle of The Glimpses of the Moon and loving it. I just wish I had more energy for reading!

I don't have big plans for this week except to get through The Inferno, but if I don't feel better, that might not happen.

Email ThisBlogThis!Share to TwitterShare to FacebookShare to Pinterest
Labels: Edith Wharton, Kittens, Personal, The Glimpses of the Moon, The House of Mirth, Weekly Wrap-Up