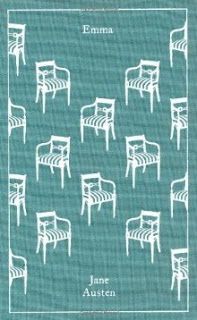 I was trying very hard not to read any more Austen in 2010, but I caved. There is something about Austen's writing that calls to me every once in awhile and I need to fulfill it. But after Emma, I only have Mansfield Park and Sense and Sensibility left on my project list. SAD.

Anyway, I have read Emma twice before, once in high school and once in college. Emma was actually the first Austen I picked up, so I have a soft spot for it, even though it is not my favorite. There is something endearing about Emma. I know that people either like her or find her annoying and immature, but I think she's rather funny. We'll have to see if that changes.

This will be my last Austen until at least December 2011 (if Mansfield Park wins the readalong) since I want to save some of her work for later on in the challenge. She is also the second author that I am reading a third novel for (Shakespeare was number one).

I have previously reviewed Persuasion and Pride and Prejudice.
Posted by Allie at 8:00 AM