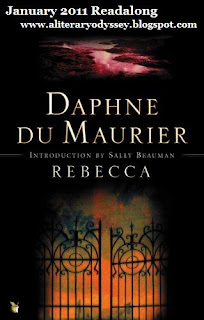 Welcome to post 1 (of 2) for the readalong of Daphne Du Maurier's Rebecca. I was extremely excited to begin reading this novel, as I have heard so many wonderful things about this haunting tale.

At first, I was not sure what was going on. Du Maurier starts the novel at some point in the future and from our unnamed narrator's point of view. In this first short chapter, she describes the haunting mansion that is Manderley; its drive and landscaping, to the haunting places she remembers. This gives the book an eerie feeling right from the beginning:

"We can never go back again, that much is certain. The past is still too close to us. The things we have tried to forget and put behind us would stir again, and that sense of fear, of furtive unrest, struggling at length to blind unreasoning panic-now mercifully stilled, thank God-might in some manner unforeseen become a living companion, as it had been before," (5).

After this kind of a beginning, I was left with many questions. Du Maurier certainly set the tone for a novel that is ripe with mystery and deception.

It is after this beginning tone that we travel back with the narrator to where the story truly begins in Monte Carlo. Young and orphaned, our narrator is a companion to an old woman, Mrs. Van Hopper, much against her will. Van Hopper is more than a little rude, crass, and obnoxious. Had I been in our young narrator's place, I would have told that old lady to shut it more than once. But it is in her company that our narrator is introduced to Maxim de Winter. He has escaped for some time away down in Monte Carlo, and after Van Hopper comes down ill, our young narrator is left with nothing to do. Dear old Max begins to take her for drives and sightseeing.

All that our narrator knows of De Winter is that he owns Manderley, a large estate in England, and that his wife passed away a year ago. She never brings it up with him in their conversations, but soon falls into a rhythm of seeing him often. I think this passage sums up what eventually happens:

"I am glad it cannot happen twice, the fever of first love. For it is a fever, and a burden, too, whatever the poets may say," (34).

I know that I can remember those feelings, with everything in life is beautiful and wonderful, and nothing can seem to go wrong. It is after she learns that she has fallen in love with Maxim that she is forced to make a decision about her future. Dear old Van Hopper wants to travel back to New York, taking our narrator with her. And as any young girl would do, she runs to Maxim to tell her. He proposes (rather unromantically) and they marry. She is to be the mistress of Manderley.

This is the point where I actually became interested. The beginning of the novel, and the time spent in Monte Carlo, seemed to move at a snail's pace. The mystery and intrigue that Du Maurier so carefully constructs in the first few chapters seems to disappear.

It is only after our narrator and Maxim return to Manderley that the mystery begins to build again, to the point that I had a hard time setting the novel down once I hit 190 pages and the end of chapter 15.

At Manderley, we get to see our young narrator flounder to fulfill a role that was recently filled by a very different woman. She begins to learn about Rebecca, Maxim's first wife, and all that she did for her home and community. Everywhere our narrator turns, there are remembrances of Rebecca. The morning-room, which our narrator now uses, is filled with items Rebecca loved and her writing.

"Unconsciously I shivered, as though someone had opened the door behind me, and let a draught into the room. I was sitting in Rebecca's chair, I was leaning against Rebecca's cushion, and the dog had come to me and laid his head upon my knee because that had been his custom, and he remembered, in the past, she had given sugar to him there," (77).

The mystery begins to build as any mention of Rebecca sends Maxim flipping out. The old housekeeper, Mrs. Danvers, seems to despise our narrator because she is not Rebecca. Mrs. Danvers seems obsessed with preserving Rebecca's memory, as she maintains Rebecca's old room and clothing. Everything is preserved as if Rebecca had just stepped out for a minute.

To top things all off, there is a mysterious cottage by the sea that an old "idiot" seems to occupy. It had once belonged to Rebecca, and now remains untouched.

This truly is a haunting novel, and I am anxious to see what will happen in the second half. Will our narrator find the information she is so longing for? Will she step out from Rebecca's shadow? What is UP with creepy Mrs. Danvers? And what happens to drive them away from Manderley?

I cannot wait to discover the ending, and I hope you are just as anxious as I am.

If you completed your reading and have a post up, please leave a link in the comments so I can link your post here. Feel free to keep checking back for other participants' links and comment away! I hope to see your second post in two weeks!