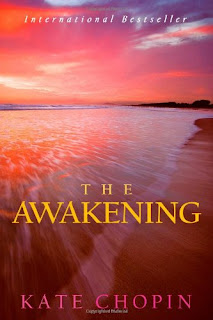 The first time I read this as a 17 year-old high school student, I knew I loved it. I don't know why I was so in love, since I certainly didn't have enough life experience to fully understand the heavy weight of this little novel.

And on subsequent rereads, I still don't think I fully understand every little nuance in language, or relate to the emotions that Edna has towards her children and life. I am not in her situation. I cannot understand what it must feel like to be sweltering under the weight of things that you don't want.

I don't have the trapped feeling my own marriage. I don't know what it would be like to feel that way. Perhaps I am lucky.

My husband understands who I am, what I enjoy, and who I want to become. He allows me the freedom to be the person I want. He doesn't hold me back, or expect me to be something else.

Edna is in a relationship like that. While her husband seems to care about her, he doesn't understand her. Instead, he holds her to the image of what she should be. When she begins to rebel against that image, he freaks out. Who wouldn't be a tad upset with their spouse if they stopped doing the things they had done for so long?

Of course, this novel was published in 1899, so the relationships between men and women, husbands and wives were held to different standards. Women were expected to marry, have babies, and take care of the household. It was never really accepted for a woman to do what she wished with her own time, to cultivate deep passions for things that were not her husband or children.

But that is what Edna so desires in this novel. And she begins to pull away, to "wake" the person inside her who has been pushed down for so long. She longer wants to see herself as a mother or a wife, but as a person.

That is a powerful realization. To know that you have been suppressing the deepest and more central part of yourself, for fear of it not being understood. And to finally release that person into an environment where everyone sees you as something else...well, that is bound to cause ripples.

But this is what happens to Edna in The Awakening. She begins to pull away from the woman she once was, define her independence, and come to the realization of what that means.

It is no wonder that this book was controversial upon its publication. A strong woman making her own choices, and being seen sexually, was too much for audiences in 1899. Now, some may read it and wonder why she didn't leave sooner.

In many ways, I am grateful for where society is now-that I am allowed to make my own decisions and follow my passions because they make me happy. I don't have to be something that will make me miserable. If I want to leave the home and work, I can. If Matt wants to stay home with the kids, he can. It may raise eyebrows, but it is never as shocking as it once could have been.

I know that as I age, have kids, have more responsibilities, that The Awakening will be something I often return to. It is a book with choice, with possibilities, and alternate meanings. Like so many other classics, I know I will pull more from it in each and every read of it.
Posted by Allie at 9:30 AM