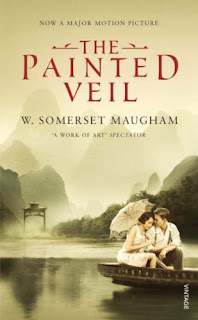 I forced myself to stop reading this novel long enough to write about my first impressions. If I hadn't stopped, I knew I would forget to mention how wonderful this novel is at a first glance.

I already know that I am in love with Maugham's writing. I cannot even begin to explain how beautiful it is. Every word, every sentence creates such glorious imagery and emotion that I want to cherish every page I turn. It is simply wonderful.

Before even beginning the novel, I made sure to read the preface. There I found this little passage I want to share with you,

"I think this is the only novel I have written in which I started from a story rather than from a character. It is difficult to explain the relation between character and plot. You cannot very well think of a character in the void; the moment you think of him, you think of him in some situation, doing something; so that the character and at least his principal action seem to be the result of a simultaneous act of the imagination. But in this case the characters were chosen to fit the story I gradually evolved; they were constructed from persons I had long known in different circumstances," (5-6).

Since I write a little on my own, I love to see how these authors craft their stories. I think that is one questions that all writers are asked: Where do you get your ideas? And I don't think there ever is a full answer to that question. Sometimes stories just happen, other times they are forced, and there are more times when a person pops into your head and says, tell my story.

But I think that in this case, it means a lot that the story came first, because this is a powerful kind of story, and one that is so incredibly moving. It opens on a scene with Kitty Fane and her lover, hiding in a room as the doorknob is twisted and turned in attempts to open it. When the moment passes, Kitty is certain that it was her husband checking on her. Her lover thinks she is overreacting and soon leaves.

The problems and history begin there. When Kitty was a little younger, she always had men around her, courting and loving her. She was never in a hurry to marry, but when her younger sister fell in love and landed quite a catch, Kitty felt the urge to marry as well (and before her sister). That is when she settles for Walter Fane, a man who is very much in love with her, but not a perfect match. Where Kitty is flighty and social, Walter is much more serious and intellectual.

They move away to Hong Kong for Walter's work, and that is when the affair starts. So determined not to see any of the good in Walter, Kitty find little faults that bother her. She dwells on them and soon falls for Charles Townsend, a higher up in the colonial government.

It is the fact of Kitty's swelling on Walter's inevitable faults that has really impacted me. My mother always told me growing up when I was dating, and as things got serious with Matt, that you cannot change a person to be who you want them to be. Their little faults and habits will always be there. You must learn to accept them or move on. This passage (long) really captures that. Here Walter is confronting Kitty,

"'I had no illusions about you,' he said. 'I knew you were silly and frivolous and empty-headed. But I loved you. I knew that your aims and ideals were vulgar and commonplace. But I loved you. I knew that you were second-rate. But I loved you. It's comic when I think how hard I tried to be amused by the things that amused you and how anxious I was to hide from you that I wasn't ignorant and vulgar and scandal-mongering and stupid. I knew how frightened you were of intelligence and I did everything I could to make you think me as big a fool as the rest of the men you know. I knew that you'd only married me for convenience. I love you so much, I didn't care. Most people, as far as I can see, when they're in love with someone and the love isn't returned feel that they have a grievance. They grow angry and bitter. I wasn't like that. I never expected you to love me, I didn't see any reason that you should, I never thought myself very lovable. I was thankful to be allowed to love you and I was enraptured when not and then I thought you were pleased with me or when I noticed in your eyes a gleam of good-humored affection. I tried not to bore you with my love; I knew I couldn't afford to of that and I was always on the lookout for the first sign that you were impatient with my affection. What most husbands expect as a right I was prepared to receive as a favor," (66).

This passage just got me when I was reading and I had to stop and breathe before moving on. I don't know how Walter could be with a woman who clearly doesn't love him, but still love her as much as he does. I could never be in a relationship like that, and I am so glad that my own marriage is filled with a lot of love and communication. But you have to respect Walter for trying as hard as he can to accept Kitty, with her faults, and sacrificing pieces of himself to make it work.

Because isn't that what you do for someone you love? You sacrifice things for their happiness to make it come first? I think so. And Walter knows that. But Kitty is so young and selfish that she doesn't know that.

So when a few pages later her own heart is broken by the equally selfish Charles Townsend, I don't feel for her. I don't even feel for her when Walter packs her things and takes her into the heart of the cholera epidemic in China. Perhaps now she will realize that you cannot be selfish in a relationship or is doomed from the beginning. Of course I don't know what will happen, but I have an idea.