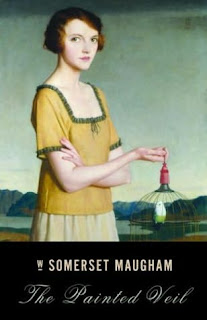 "There is only one way to win hearts and that is to make oneself like unto those of whom one would be loved," (179).

I don't know if I can write my final thoughts on a book that has so deeply moved my emotions. I shall try, but I am not making any promises that this post won't be fully of gushing fan-girldom, or mild spoilers (nothing that will ruin the book for you, but I will say a few key plot points that happen within the first 100 pages).

I left off in my first post by saying that after Walter discovered Kitty's affair, he accepted a position working in the middle of the cholera epidemic to treat the illness' victims. Kitty had been an opportunity to go and talk to her lover, Charles. If he agreed to divorce his own wife and take care of her, Walter would let her go. If not, Kitty had to leave with Walter and go into the heart of the epidemic.

It isn't a surprise to the reader when Charles outright rejects her. What more would you really expect from a man who is already married and holds a high government position? I think I would have been shocked had he said, "Yes, Kitty, I will divorce my wife and marry you." I think we all know that if you are silly and stupid enough to have an affair with a married man, he will never leave his wife for you. Why would he? So I knew that Kitty would be traveling with her husband, who now seems to despise her, into the heart of the epidemic.

And you can imagine how much it hurts when, once there, they Fanes befriend another man in town, who knows Charles and his adultrous ways. And while I certainly didn't live Kitty and her unfaithfulness to Walter, it stung me when their new friend Waddington and Kitty have the following conversation about Charles:

'Oh, no, she knows they don't go very far. She says she'd like to be able to make friends of the poor little things who fall to Charlie; but they're always so common. She says it's really not very flattering to her that the women who fall in love with her husband are so uncommonly second-rate,'" (101-102).

Ouch, right? To think that this man loved you and would care for you, but to hear an opinion about yourself like that? Ouch.

At first I didn't feel sorry for Kitty. She brought this pain on herself and her husband. By having an affair and being unfaithful, didn't she deserve some kind of pain? But as the novel progresses, and the realities of the epidemic hit Kitty, she begins to grow up. Probably for the first time in her life, she begins to realize that she did wrong. She begins to see that Walter is a good man, too good for her.

"Waddington too thought highly of Walter. She alone had been blind to his merit. Why? Because he loved her and she did not love him. What was it in the human heart that made you despise a man because he loved you?" (125).

Kitty continues to change. Alone, with no one but Walter, she turns to a local convent to find peace in work. She tries to help those around her, and in turn, begins to change herself. The reader can see her struggles to understand what she did, the pain she caused herself and Walter, and we begin to hope for the ending we want. We want peace and happiness for both of them, don't we? We want Kitty to see that she had a great and glorious man in front of her the entire time, and that he is entirely deserving of her love.

I don't want to give away what happens, or the transformation that takes place in Kitty. But I was deeply moved by what happens, and in the manner of Maugham's writing. It is beautiful. If you want to read something that will truly move you down to your core, look no further than this.

"'Remember that it is nothing to do your duty, that is demanded of you and is no more meritorious than to wash your hands when they are dirty; the only thing that counts is the love of duty; when love and duty are one, then grace is in you and you will enjoy a happiness which passes all understanding,'" (206).
Posted by Allie at 8:00 AM