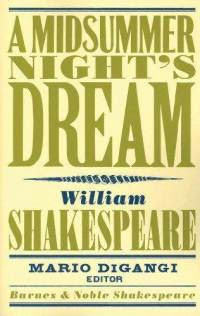 “Lord, what fools these mortals be!”

For those of you who are getting tired of the Shakespeare, be happy since this is my last post on one of his plays. Yep, play #11 for the event is A Midsummer Night's Dream. I purposefully left this one for last. Besides Romeo and Juliet and Much Ado About Nothing, I know this play the best. I've lost count of how many times I've read it or seen the movie. It is a fabulous example of Shakespeare at his best and one of the "funnest" plays I've read.

This is a play that focuses on the connection between the fairy realm and that of mortals. But there is also a sub-plot that focuses a bit on class issues. I'll touch on that in a minute.

The main plot focuses on 4 humans who wander into the forest. The two men, Demetrius and Lysander, are both in love with Hermia. Only one of them (Demetrius) has the favor of her father, and she loves the other (Lysander). There is also Helena, who adores Demetrius.

The four of the them are wandering around the forest, fighting over each other. They gain the attention of Oberon, king of the fairies, and his friend Robin Goodfellow (he is also called Puck in many editions). Oberon wants to fix the problem by having Demetrius fall in love with Helena using a flower powder, but Robin screws up the instructions and winds up having both men fall in love with Helena. So now, instead of the two men chasing Hermia, they wind up chasing Helena. It causes some funny interactions, but eventually Oberon straightens out the problems, leaving the couples paired off and ready to return to Athens to get married. In typical Shakespearean comedy fashion, it all works out.

The sub-plot focuses on an acting troupe. They are also in the woods at the same time as our four lovers, practicing for a play to perform before the King and Queen of Athens. They serve as the clowns in the play-causing mischief, etc. There are some hilarious scenes with these characters. I love when one, Bottom, is given the head of an ass and Titania, Oberon's wife, falls in love with him due to a spell. I am sure that for viewers back in the Globe, seeing that on stage was a riot.

But they really steal the play with the last Act of the play. They finally "perform" the play they've been practicing live in front of our two couples and the Royal couple. Before they perform, they give a little prologue, assuring the ladies that it is an actor, not a lion, who is roaring at them, and that the "wall" in the play is a man who is only symbolizing the wall. Hilarious. I am sure that with the right staging, etc, this was the highlight of the play in Shakespeare's time.You also get this gem as one of the characters in the play dies...

Ah, so funny. But, while this whole scene is certainly funny, it is important to at least notice the undertone. All of the characters in the acting troupe are from the working class. Their main goal in performing before the King and Queen is to earn the opportunity to make more money. They are at the mercy of those higher than themselves. Their bits of stupidity and hilarity are caused by their lack of education and knowledge about acting. I also think that Shakespeare uses them to poke fun at unprofessional acting troupes. I believe that Shakespeare and many of his contemporaries were showing that actors were higher than the everyday man. But those are my guesses.

The other piece of the play that I love are the ending lines, which I'll also end with. They say a lot about the play, but I also find them a fitting closure for my discussion on Shakespeare's plays this month. 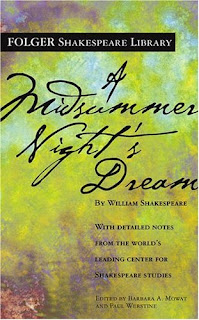 “If we shadows have offended,
Think but this, and all is mended,
That you have but slumbered here
While these visions did appear.
And this weak and idle theme,
No more yielding but a dream,
Gentles, do not reprehend:
If you pardon, we will mend:
And, as I am an honest Puck,
If we have unearned luck
Now to 'scape the serpent's tongue,
We will make amends ere long;
Else the Puck a liar call;
So, good night unto you all.
Give me your hands, if we be friends,
And Robin shall restore amends.”
Posted by Allie at 8:30 AM