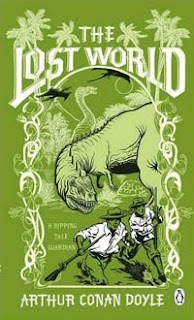 I am a little torn in writing about this title. And it's not because I didn't enjoy it, but because I was expecting something different than I got.

It certainly wasn't the writing style. If I had started this novel without knowing the name of the author, I would have guessed. After reading all of his Holmes stories and novels, I think I have Doyle pegged. He has a distinctive voice that carries in all of his writing. And it was certainly clear here.

No, I was more disappointed in the story. I mean, look at that cover. Don't you expect to see lots of dinosaurs and monsters? So did I. That is not to say that the book didn't have them, but I felt, for what I understood the book to be, that there would be more. This is probably because I am completely desensitized to this kind of action and gore. I've seen those Jurassic Park movies. I am sure that my 21st century mind and experience ruined this for me.

I can guess that back when this was published, it was shocking and scary. A group of men are in a mysterious place deep in the Amazon searching for monsters. A couple of times they do get chased (and by cannibals-it honestly reminded me of the scene from Pirates of the Caribbean when they are hanging in the bone cages). But that action didn't start until halfway through.

We spend the first half of the book getting to know our main character, Ed Malone, a lowly news reporter who is in love with some girl. He wants to prove to her that he can be brave and daring, so when the opportunity arises to go and seek out the "lost world" that a crazed professor has reportedly found, he goes. And then we spend the rest of that half of the book traveling and getting to the plateau. All the action with the dinosaurs and monsters is therefore condensed into too short chapters (I really just wanted someone to get eaten. Is that so much to ask for?).

The other thing that irritated me was the racism. The men on the expedition are learned men and perhaps I held them to too high a standard, but small comments and bits of dialogue irritated me, especially when referring to the "loyal and faithful Negro" waiting for them at all times.

All that being said, I did walk away from it liking it. I could see giving this to a teenage boy and having him read it. I think teenage boys would love it! In fact, while not a teenage boy, but certainly A boy, my husband has been eying my copy of the book and asking about it. I think he would love this book, as it is very much up his alley-adventure, guns, some violence, and not very long.

I think I just prefer my classics a little heavier. But this was certainly a fun read and a great way to see the beginnings of science-fiction and adventure novels. I would definitely recommend it if those kinds of titles are up your alley, otherwise this may not be your preferred cup of tea. I would most definitely refer you to the Holmes stories-there is probably a reason why we cherish those more than this one. :)
Posted by Allie at 9:03 AM