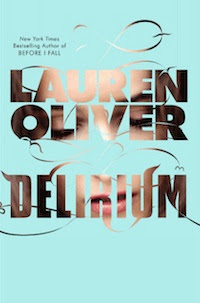 When I first heard about this title, I was so excited to get my hands on it. Perhaps it was the idea of a dystopian society where love is outlawed, or the hype, but I felt this was a contemporary book that I would sink my teeth into and love.

I ended up getting a copy from my husband and I read the novel this weekend during my "Outta the Rut Readathon." And to give you a first impression of what I thought, let me tell you the following: I read the first half and set the book down for a lunch break. And then I didn't want to pick the book back up again. I just didn't want to finish it.

But I did finish it. I wanted to be able to say that I had so I can explain why I didn't like it.

I feel I should first say that there was no problem with the actual writing. Oliver is good at her craft and writes in a way that immediately draws in her reader. I was sucked in for the first few chapters. And, it was only the writing ability that kept me engaged. Otherwise I never would have finished the book.

I think it all comes down to two points. First, the story was incredibly predictable. I knew where Oliver was headed and guessed the ending halfway through. There was only one direction that Oliver could have taken it...and that's where she went. In addition, we could guess what Lena (the MC) was going to do. Oh, her friend who she hasn't talked to in a month is in trouble? OF COURSE she's going to go after her. Like I said, predictable.

The "twists" were also predictable. The fact is, so many authors use "twists" to "shock" their readers that they are worn out and ill-used. There must be some school of thought where authors say, "I know that my readers won't expect this!" so they do it. The problem is, every author, particularly in dystopians, uses these twists. They don't surprise us anymore.

When I finished, I felt like I had read a novel that I had read before. There were the same basic plot conventions, the same quirks, and the same outcome. I was not impressed.

My other big problem with the novel was the pacing. It felt off to me. At times there was too much description, and other times, not enough. Sometimes the action was heavy and intense, and other portions seemed to crawl forward. It annoyed me. A more specific example is the end of the book. The last few scenes exploded and only lasted a few pages. When I finished I couldn't help thinking, "Ummm, what happened? Did I miss something?" Oliver sped too quickly through the action.

I want you all to know that I have nothing against Oliver, YA, or dystopians. I don't review YA here regularly, and I haven't read a great deal of it recently because of my own classics project. But I have read a LOT of YA and dystopian novels in the past, and before this current stream of them has come out. But I find they are getting tired. There are too many and they seem to be recycling the same plot points and conventions-just like paranormal YA titles. It is what happens-there is a cycle.

Why do you think stream-of-consciousness writing done by Faulkner and Woolf died out? Partly because it is a difficult technique to master, but also because as a genre, the market was saturated in their lifetime. Think of cheesy horror films-they have had a heyday but gradually they are dying out. The point is, after a number of years and MANY versions of the same basic plot, audiences get tired of it and move on to the next thing.

I think the whole dystopian genre is on its way out. But, that's my opinion and I can be completely wrong.

Going back to Delirium, I think I might read the sequel, even with all this being said. I am curious to see where Oliver takes it (and to see if I'm right), but I'm not sure. I think I may just be jaded in regards to contemporary literature and YA (similar to Jillian's recent experience). Don't let my biased and grumptastic opinion deter you from reading this. After all, I read this shortly after reading Oliver Twist and Siddhartha. Perhaps not a good mix?

What did you think of this one if you read it? For those of you who read "heavy" fiction a lot, how has is "spoiled" escapist reading for you?
Posted by Allie at 8:00 AM