Review: Across the Universe by Beth Revis. 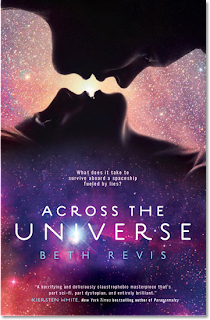 When this book was announced, I squealed inside. From the description, I knew that it was something I would love. Part of me wished that something like this would have come out when I was younger.

When I was actually a teen, there was very little in the way of science-fiction or fantasy in the YA section. The YA genres have boomed in recent years. I never remembered having this much selection and hype as a teen searching for titles to read.

I owe my love of science-fiction to reading Orson Scott Card's Ender's Game as a ninth grader. It hooked me on the genre and since, I have acquired quite a liking for science-fiction. Back then, I was forced to roam the scary adult shelves and find things to read that way. It was no always a success. While the sci-fi elements captivated me, some of the storylines were just not what I wanted (as a fourteen and fifteen year old girl).

This novel, however, would have made my beginning sci-fi loving heart burst with happiness. So I knew I had to get it, read it, and share my love with all of you. I managed to read this in the course of two long reads (sunday night and monday morning). It was lovely and I was hooked on the idea of the story.

One of the first things that I love about this book is that the publisher made a reversible cover. I think that was an AWESOME idea and I am hoping more publishers pick up on that idea. In addition to the beautiful cover seen above, the inside was a diagram of the ship-seen below: I actually switched my cover around to the diagram I loved it so much. Cool idea!

I also loved the manner of telling the story. Through a dual narration, Revis takes on a story of mystery, murder, and deception. I love having multiple narrators in a novel. The trick to having multiple people tell a story is that they each need to have a distinct voice to make it believable. if the characters sound too much alike, I don't buy. Revis succeeds and the voices of Amy and Elder come through strongly. I particularly love the portions when Amy is frozen and "dreaming."

Another thing I loved about this novel is the setting. As a sci-fi nut, I love using ships and other planets as the backdrops for stories. More and more fantasy/sci-fi literature is breaking away from that, so I am glad that Revis chose the ship, Godspeed, as her setting. It makes the story much more powerful-the fact that the characters can't hide or run away.

The other strength of the novel is Revis' writing. It is powerful. There were some sentences and passages that literally took my breath away;

"This is the secret of the stars, I tell myself. In the end, we are alone. No matter how close you seem, no one else can touch you."

I also loved this passage;

"I am as silent as death.
Do this: Go to your bedroom. Your nice, safe, warm bedroom that is not a glass coffin behind a morgue door. Lie down on your bed not made of ice. Stick your fingers in your ears. Do you hear that? The pulse of life from your heart, the slow in-and-out from your lungs? Even when you are silent, even when you block out all noise, your body is still a cacophony of life. Mine is not. It is the silence that drives me mad. The silence that drives the nightmares to me.
Because what if I am dead?"

She truly has a gift.

However, there were some things that didn't work for me. And I don't know if my reading of classics has tainted other forms of literature, but I found myself criticizing a few things in the novel.

The first is a scene that takes place during the "Season" in the book. Those of you who have read the book will know what I am talking about. I felt the scene was out of place and unnecessary to Amy's story. I don't know if it was there for shock value, or if Revis felt it was needed to get her point across, but I felt it was unnecessary and took away from the beauty of her writing to that point.

The second problem I had was calling this a pure sci-fi novel. While there was certainly sci-fi elements to the story, I wouldn't really call this sci-fi. Earlier I mentioned one of the other big youth sci-fi novels of all time is Ender's Game. Both of these novels share some of the same elements: set on a space ship, murders, mystery, and young characters. What sets them apart is the scientific elements. Card really develops the science behind what goes on in space. Revis does not (I should point out that she stated in an interview that this was intentional).

Personally, if I am going to read something sci-fi, I want the scientific element. I want the in-depth explanations and theory. That is what makes the genre. So for me, I would call this "soft sci-fi" or just a dystopian type novel. And there is nothing wrong with that classification. I just want to point out that it was not what I had expected based on what I read.

In all, Revis tells a compelling tale, and one that certainly hooked me. Perhaps you will feel the same.
Posted by Allie at 9:00 AM

Email ThisBlogThis!Share to TwitterShare to FacebookShare to Pinterest
Labels: Across the Universe, Beth Revis, Finished, Orson Scott Card, Science-fiction, YA