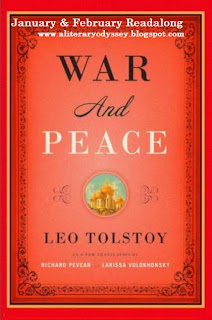 Welcome to the third post for the readalong of Leo Tolstoy's War and Peace. We first posted nearly a month ago on the first volume, and just about two weeks ago on the second volume.

Today's post covers the third volume of Tolstoy's masterpiece and is also the longest section we were reading.

I kind of struggled through this volume. I don't think it was anything Tolstoy did, but merely my own inability to keep up with all of this reading. For the first few days I was trying to read this volume, I could only read a chapter or two before setting the book down. It eventually got better as I forced myself to keep going, but I think I had some kind of mental block going on. I say all that to let you know that some details are a little hazy on this section.

One of the things I did love in this section was how Tolstoy continued to add dimension to his characters. We were also shown glimpses of characters we hadn't seen in a little bit. Now I felt like I was beginning to understand some of these characters-their struggles and triumphs. I can see why they change their minds about things, or decide to marry someone else instead of who they said they were (not that I agree with that kind of flightiness). But I could understand the difficulties of loving in a time of war...and peace.

In addition to the depth he gave the characters, Tolstoy also adds depth to the Russian people as a whole. I know I have probably already said this in one of my earlier posts, but I know little about Russia in this time period. I mainly know Russia from the Bolshevik Revolution forward. So I am enjoying seeing Russian life and passion. It grabs me and I love the little details.

Napoleon really comes into the story as a main character. Tolstoy really develops the little details about him and I felt that like the other characters, I began to understand him. Again, my knowledge of history is a little rough here, so having these details really helped. I think that in the future I need to read a little more on this Napoleon fellow.

Lastly, there is a large battle in this third volume-the Battle of Borodino. Pierre goes to watch and we see his reactions to the death and destruction. War is not pretty. And I am glad that Tolstoy really seems to hammer home that point through Pierre's reactions.

By the end of the third volume, a few characters are supposedly dead (for some reason, i don't think they really are? Maybe they come back? Please?), and everyone else seems to be in chaos. Napoleon is marching on Moscow, and I am left wondering how Tolstoy is going to pull everyone else back together.

If you participated, please leave a link below so that I can link your post here. See you on the 28th for the last volume and epilogues!

Avid Reader
Carey
Selene
Kristi
Posted by Allie at 11:00 AM