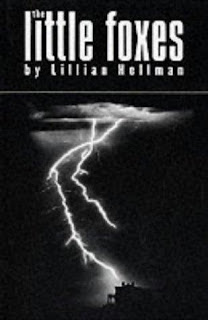 I wanted something short to plow through during the readathon on Saturday, and The Little Foxes has been staring at me since I finally bought a copy. This was the hardest play to find, since it doesn't seem as well-known as the others on my list. In fact, the only edition I could find to purchase was the edition used for productions (seen below). I also read online about the movie adaptation with Bette Davis, now on my list of movies I need to watch at some point.

The Little Foxes was first published in 1939. The movie adaptation came out in 1941, so I have to assume it was well received in play format.

Like all the plays I have read for the challenge, this one would also be even more spectacular to see live. While you can get a lot out of reading the text of a play, there is less description. You can only get that by watching the actors.

The play is set around 1900 in a small Southern town. All of the main characters are from the Hubbard family. Ben, Oscar, and Regina are siblings who are fairly well off in the town. From the observations and statements made by two minor characters-Addie, Regina's maid and Birdie, Oscar's wife-it appears the Hubbards are not well liked in town. The men go out shooting and throw away their kills, even though they could be put to better use for the poorer families in town. They also appear to be rather haughty, looking down on the others they interact with.

At the beginning of the play, the Hubbards are entertaining a rich Northerner who wants to build a cotton mill down by the cotton fields. He is will to put in 49% of the cost if the three Hubbards will put in the remaining 51%. All the events after this revolve around the issue of money. Both Ben and Oscar have their share, but Regina must beg for her portion from her husband, who is laid up in a hospital with a heart condition.

This is where the action really begins. Regina is a slimy, self-centered witch who insists her husband leave the safety of the hospital to come home and give her the money she "needs" for this business venture. After sending her young teenage daughter, Alexandra, so go get him, all three of the Hubbards are waiting to pounce on him the moment he gets home.

The actions after that just show how much greed can push people to doing horrible things. The play really speaks to the power money has over us all, and how if we let it, it can ultimately destroy us. It also speaks a bit about family relationships. I think we all know that going into business with a family member isn't always the best idea... 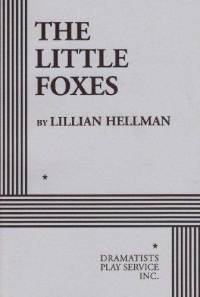 More importantly, I found it interesting to view the events from Alexandra's point of view. At one point, she is used as a pawn to get more money into the deal. She is also used by her mother to bring home her father, since she is the only one to convince him to come home. At the end, I really felt for her and what she witnessed-the pure evil of her mother and uncles.

I also found Birdie to be an interesting character. As Oscar's wife, she is supposed to be a well-respected and loved woman. But her husband seems to despise her, and she turns to alcohol to cope with a lot of her problems. I cannot imagine being trapped in such a marriage, or knowing your husband only married you to get to your money. Of all the characters, I found Birdie to be the most honest.

In all, I really enjoyed this play. It was a fast read, and I enjoyed the way Hellman brought me into the living room of the Hubbards (the only setting for the play). It IS interesting to think that all kinds of things go on behind our neighbors' walls, and we don't really know what kind of people they are. I think this is definitely a play worth reading if you get the chance. I am also going to be on the lookout for a performance at some point. I would have killed to see the original performance with Tallulah Bankhead as Regina. She was such a wonderful actress, and I can just see her in the role.

As a side note, if you can find an edition that was NOT a production version of the play, I recommend it. My edition had a LOT of stage directions, to the point that it was distracting from the text. I didn't need to know when an actor walked upstage or downstage between words, etc.

Has anyone read or seen this one?