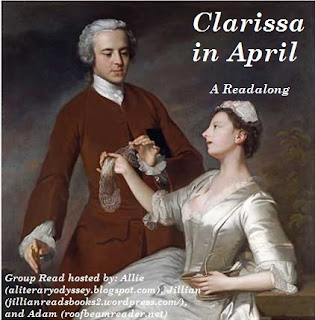 Well, it is officially the end of April, and I should be posting about how amazingly wonderful it was to read all of Samuel Richardson's Clarissa in one month.

If you didn't guess by the title, I should clue you in. My attempt to read Clarissa this month was a total failure. I think that the three of us who were attempting this (Adam and Jillian were my partners in crime) all felt like we "could" do it, but none of us did. I think Jillian made it the furthest before setting it aside, and by stalking Adam on Goodreads, he only made it to page 165. My Goodreads isn't up to date (I should fix that), but I only made it to page 450 or so.

So why did we all seem to fail?

Personally, I had way too much going on in the month of April to concentrate on such a BIG book. Since my copy is so massive and heavy, it didn't fit easily in my purse (in fact, it doesn't fit at all), so it stayed home a lot of the time and smaller books were brought with me. I also had a really hard time reading it in bed, which is where I spend a lot of time reading. I usually read while on my back, but after being smacked in the face once by not holding the book steady, I gave up. It also killed my hands to hold it open for long periods of time.

I also think I simply misjudged my abilities to plow through it as I intended. The first 200 pages or so are incredibly repetitive, so I struggled to get past that point (now it is A LOT better). The font is small, and the pages are large.

More than anything else, I was simple too busy to read it in April. I had some new units to prep for school that required me to reread those books, and since I was so worn out, I could only read 20 or so pages of Clarissa at a time before throwing the towel and moving on to something easier.

So, I sadly have to admit that I failed in reading this in April. I'm not sure I can actually set a date for finishing it, but ideally, I'd like to be done with it by the end of August. It is the perfect book for rainy summer days, so I hope that at some point I can say, "Hey! I finished that really big book I was talking about!"


(I also have plans to read Richardson's Pamela this year, so we'll see how that goes).
Posted by Allie at 7:15 AM