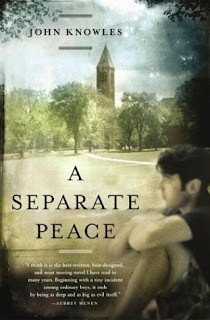 I read this for the first time a few summers ago. I think I was 19 or 20 and beginning to realize that I needed more classics in my life. That was a summer I was working at the other big park in my city and spent many shifts sitting in the booth selling permits, or wasting away in the concessions stand. Since I was spending so much time read at work, I had a rule that summer that for every 3 fun reads, I had to read 1 classic.

It worked out rather well, and I even got other employees to pick up some novels (I believe it was the same summer we started a book club and all the female employees read The Bell Jar). For me, it was a great way to read some classic literature on my own.

This novel, in particular, stood out from the rest that summer. I knew nothing about it going in, except that it was often taught in schools and was about boys. The rest was for me to discover, and I vividly remember reading it in the heat of the concession stand. I was absorbed in it and groaned inwardly whenever someone came to buy something.

It has been a few years since then, but I am hoping it packs the same punch. I thought about it for days afterwards when I first read it. Let's see if a second read feels the same.

*I should note that this is a backlogged review.*
Posted by Allie at 9:00 AM