Review: Thunder Rolling in the Mountains by Scott O'Dell and Elizabeth Hall. 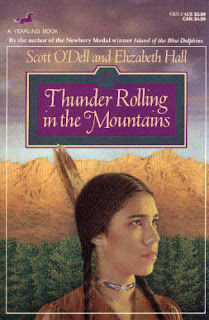 I was kind of a Scott O'Dell junkie when I was a kid. I read a lot of his work and was always bringing my copies with me on road trips. All of my copies are battered and beaten now, but I love them. Like all of the books I reread in November, they are a part of my childhood.

This particular novel may even edge out Island of the Blue Dolphins as my all-time favorite.

Thunder Rolling in the Mountains was the book O'Dell was working on in 1989 when he passed away. His wife, Elizabeth Hall, finished the novel. It is basically the story of Chief Joseph and the Nez Perce people.

Like many Native American tribes, the Nez Perce were told they had to leave their lands and go to a reservation. Instead of giving in, they fled, in hope that the United States Army would leave them alone. The speech Chief Joseph made when his people were captured is famous, and it something I had my students learn when I taught United States history:

"Tell General Howard I know his Heart. What He told me before I have in my heart. I am tired of fighting, Looking Glass is dead. Too-Hul-hul-sote is dead. The old men are all dead. It is the young men who say yes or no. He who led on the young men is dead. It is cold and we have no blankets. The little children are freezing to death. My people, some of them have run away to the hills, and have no blankets, no food; no one knows where they are--perhaps freezing to death. I want to have time to look for my children and see how many of them I can find. Maybe I shall find them among the dead. Hear me, my chiefs. I am tired; my heart is sick and sad. From where the sun now stands I will fight no more forever."

As a child, I was fascinated with the lives of the Native Americans, and this story of survival and fighting was one that gripped me far more than any other that O'Dell wrote about. It made me crave knowledge about other tribes in the United States and what happened to them as well.

And in terms of historical fiction, O'Dell did his research. He outlined the battles and the deaths of the Nez Perce people beautifully. And while his narrator, Sound of Running Feet, seems detached and hollow, it fits the tone of her tribe's story. They were running from their only home in hopes that they would find aid somewhere, and in the end, many died.

I think I can blame O'Dell for spurring my love of history at such a young age. Stories like this are why I find history so fascinating to study. And it probably led to my decision to earn a history degree along with my English degree. In my college classes where we discussed indigenous tribes and peoples, I was always fascinated and in love with the depth and strength of their cultures.

I was reminded of all these things this time around and I wish there were more novels like this for young adults. I always craved more historical fiction as a child and teen, and in the time in which I was growing up, there weren't as many options.

If you are looking for a starting point for Native American culture and history, I can suggest nothing better than O'Dell's works for young readers. They are passionate, well-written, and thoroughly researched. They helped mold my own passion for history, perhaps they can help a child you know as well.
Posted by Allie at 9:30 AM

Email ThisBlogThis!Share to TwitterShare to FacebookShare to Pinterest
Labels: Historical Fiction, Scott O'Dell, Thunder Rolling in the Mountains, YA