Review: The BFG and Matilda by Roald Dahl.

I had the same teacher in the second and third grade, and she is the one who introduced me to the world of Roald Dahl. I am forever grateful to her for doing so. She always had storytime for her classes after lunch, and as a class, we read a lot of great literature.

One her favorite authors was Roald Dahl, so we read a number of his novels as a class.

The first Roald Dahl novel I read this last month was The BFG. The BFG is actually the Big Friendly Giant, and it was a reread for me. This is one of the many Dahl novels we read as a class way back when and it had been a long time since I had picked it up.

The illustrations are classic and the story of the friendly giant's fight with the other of his kind is heartwarming. The BFG sees a young girl, Sophie, out of her bed in the deep of night while he is blowing dreams through windows. Rather than leave her there to rat him out, he snatches her and brings her back to giant country. There Sophie is allowed in on the secrets of giant life, including the nastiness of snozzcumbers.

Once Sophie learns that the other giants eat humans every night, she launches a plan with the BFG to get the Queen of England to do something about the giants.

It is a fun and wonderful book. I love the way the BFG talks and enlightens Sophie as to the details of his life. The illustrations by Quentin Blake add so much to the story, as they do to all Dahl stories, and I found myself taking a lot of time to look closely at each illustration. 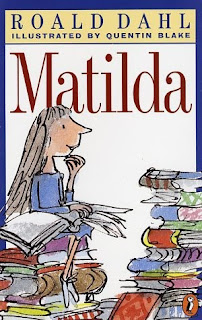 all-time favorites Matilda. I think all of us who are bookworms can relate to the early life of Matilda and her fascination with literature. This is a novel I read on my own as a child, and I always felt a deep and lasting kinship with her because of her love of reading.

This time around, I focused more on the later aspects of the novel-her experiences at school and taking down the evil headmistress Trunchbull. I still loved it as much as I did as a kid, but since I hadn't read it in a great while, I found myself picturing scenes from that movie. I hate the movie version, so I was disappointed that I was reminded of its faults as I read the novel.

But I did love it this time around. I just think I need a little more distance before rereading it again any time soon, and more time to block out the movie version.

I do want to write here the list of classics that Matilda reads near the beginning of the novel. For those of you unfamiliar with the novel, Matilda learns to read at a young age and since her parents will not buy her a book, she finds her way to the library. She ends up befriending the librarian who recommends a long list of books for her. Here at the ones outlined in the book:
I am glad that all but 2 of these are on my own list (the two missing are Gone to Earth and The Good Companions). But my little classics heart loves that the books that were considered classics then are still at the top of the list....even if three of them are by that Dickens fellow. :)

Anyway, if you have a child in your life you need to introduce them to the wonder of Roald Dahl. Some of my other favorites are The Witches, James and the Giant Peach, Fantastic Mr. Fox, and Charlie and the Chocolate Factory.
Posted by Allie at 9:00 AM