Christmas Eve was spent with my dad's side of the family. We all pick names and purchase a gift for the name we drew. My aunt had my name and bought me two more sets of our dishes since they are being discontinued! I was really excited and they are already washed and in the cupboard.

Its always a fun time and there were a lot of laughs this year. Last year, my aunt and uncle (who were hosting this year) adopted twin boys from Russia. They had no idea what was going on last year, so it was fun to see them all excited this year. The highlight was when they opened Star Wars themed guns and were chasing each other around with their storm trooper helmets on. Quite funny, let me tell you.

Christmas morning was spent with my immediate family, where Matt and I got SPOILED. Everyone else did too. My parents are always extremely generous and since all of us kids exchange gifts as well, there were large piles of beautifully wrapped packages waiting for all of us. Besides the books which I'll talk about in a minute, I got Seasons 1-10 of Friends, a Le Crueset Canister set for our kitchen, a Le Crueset crock for all of those bulky kitchen utensils, new salt and pepper shakers, a tart dish, some jewelry, a second set of sheets for our bed (yay for new sheets!), and a bunch of wonderful little items that have already been put away. After gifts we ate a big breakfast and talked before Matt and I headed over to his parents for lunch and more gifts.

At Matt's house we arrived just in time for the big gift giving extravaganza. We only exchange with his parents, but I don't think our 6 nieces and nephews minded. They were opening gifts left and right from their grandma and grandpa! I got to hold the baby (she's about 9 months or so), so that was wonderfully fun. :) Matt's parents got me a subscription to Paula Deen's magazine (I LOVE Paula. I would adopt her if I could) as well as a beautiful necklace. Then we ate, again, and stayed to chat for a few hours before heading home to check on the kitties and empty our full Jeep.

We headed back to my parents for gifts with my mom's side, where we do a one gift exchange as well. My uncle got me an IKEA gift card, which is perfect as I need a new desk. We sold Matt's HUGE one when we moved and he took mine, which was big. I'm getting a smaller one, but the gift card will be wonderful. We're also going to get some wall shelves for around the apartment, so yay for IKEA. We ate again (I was about to burst by this point), before pigging out on my delish apple pie and banana splits and cookies. I was good and only had a scoop of frozen yogurt, since I have been watching what I am eating, but it was wonderful.

After that, we headed home and I unpacked a few things before calling it a night and passing out for 12 hours.

Sunday was spent cleaning and unpacking while Matt was at work. When he got home we got cleaned up and went out for an AMAZING dinner to celebrate our anniversary. We had the most delicious calimari and I had a shrimp dish (YUM). It was low key and wonderful, just like what I wanted. It is hard to believe that we've been married for a whole year already, but I am excited to be moving forward together in 2011. If you feel like reading some sappiness, I wrote a post yesterday for Matt. It is cheesy. :)

Now on to the good stuff, BOOK LOOT!

I made out like a bandit this year and got a good deal of books, much to my brothers' disgust. They told me, after moving us in here, that they never want to move my books again. :) Well, now I have a big chunk of new titles to shelve and figure out where to put. My classics shelf is bursting, so I might need to clear some space on my other shelves.

I should point out ahead of time that I had to take this on my phone, since the cord for our camera is packed in one of Matt's boxes and I don't feel like digging around for it. 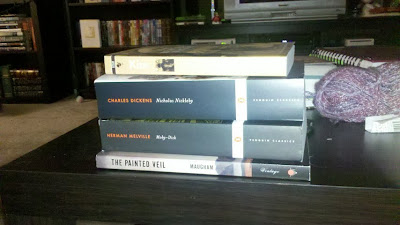 This stack is actually of some recent acquisitions. I figured I would throw it in here for kicks. :) I picked up The Painted Veil by Maugham after a conversation with Amanda at The Zen Leaf about his work. I had to replace a title on my list and figured a novel by Maugham would be a great fit (the work I replaced was "The Dead" by James Joyce, since it is included in The Dubliners which I also have to read. No sense in reading it twice). I already read it (I was excited about it), and it was EXCELLENT. I have also read Pegasus already and my post went up sometime last week. The book by Flanagan is another book Matt picked up for me recently and is the ninth book in the Ranger's Apprentice series. I love that series and needed this one in hardcover to match. :)

Kim, Moby Dick and Nicholas Nickleby are all on my list and since I was given a gift card, I picked them up on a trip to the bookstore. Moby Dick failed to win in a readalong poll, but I am still planning on reading it this year and soon. 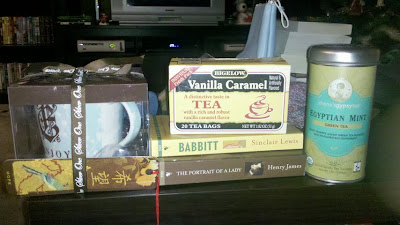 From left to right and top to bottom:
Big coffee/tea mug
bookmark
Vanilla Caramel Tea
Babbitt by Sinclair Lewis
The Portrait of a Lady by Henry James
Eygyptian Mint Green Tea
This is all of the loot I received from the Book Blogger Holiday Swap! My package came a while ago and I opened it then, but because of the camera situation, I am just now getting a picture up. I was so incredibly excited for all of these goodies and my Santa was super thoughtful and generous! And I have to say that the vanilla caramel tea is delicious. Thank you! 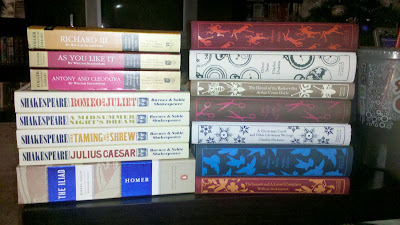 All of these lovelies I opened on Christmas morning! My sister was responsible for the pile of Shakespeare wonderfulness and the Homer. I was really excited for the Shakespeare since I am planning on reading a good chunk of his plays this year to get them out of the way. :) I love both sets of these editions, and this is a great pile to choose from. So many wonderful plays!

The pile on the right was from my parents, and yes, those are the beautiful Penguin cloth bound editions that I am in love with. I just love these editions and I know that I talk about them often, but look at how pretty! I am excited to get these on the shelf next to their brothers and sisters. Now I have all of the released titles and just have to wait till April for the next four to come out (Middlemarch, Dracula, A Tale of Two Cities, and Gulliver's Travels). I have a book problem, did you know that?

My parents also resubscribed me to Bookmarks magazine, which I have been getting for the past year. I am so excited for the next edition to come into my hands. :)

Well, that was my book loot from Christmas. I hope you got some books as well!

Happy Reading everyone!
Posted by Allie at 8:00 AM