Review: The Giver, Gathering Blue and Messenger by Lois Lowry. 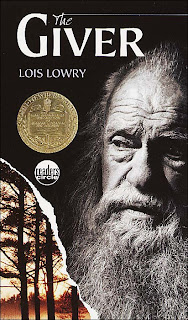 In another return to my youth in the month of November, I decided to reread a book and its two companion novels that has had a large impact on me as a person. The Giver remains one of my all-time favorite novels, even after this reread. You would think that after all of the great classic literature I've been reading that it would somehow begin to pale in comparison.

I have already reviewed this novel as part of my "Thursday Treats" feature, and you can find that review here, but I still have more to add.

Jonas is turning 12 and like all the other members of his society, he will be given a role to fulfill. When the time comes, however, he is given a special role, that of the Receiver. It will be his job to take on the memories of the past-of war, snow, colors, pain, and real family-so that his community will not have to.

This time around, I will still incredibly moved by Jonas' story. After all, he is only a 12 year old boy and he is faced with a world that he begins to question. I was reminded how much I love Lowry's way of letting the story speak for itself. And the open ending still made perfect sense.

I think that no matter what I read, or often I reread this novel, that it will remain a cherished friend. It moves me every time I read it and I cannot recommend it enough. 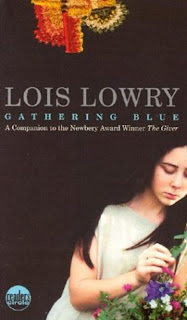 I remember that when Lowry released the first companion novel, Gathering Blue, people were outraged. Some felt it was taking away from the power of The Giver and others wanted more answers.

I always viewed it as a separate entity, which is why I recommend both companions as much as I recommend The Giver.

In Gathering Blue, we are introduced to another young person, Kira, and her society. Like Jonas' community, Kira lives in a place that is highly regulated. Those with deformities are killed and it is only by her mother's love that she is saved. Kira, born with a twisted and malformed leg, must battle the society around her for her entire life. As something less than perfect, she must work harder.

She is eventually taken in by the Guardians and given a task, to fix the woven robe that the Singer wears each Gathering. The Singer tells the tale of human history-the suffering, wars, and peaceful times-to remind those in the community of what was.

Like Jonas, Kira begins to realize that her world is not perfect and there are many things that need to be fixed. In the end, she decides to stay behind in her community to help fix it and who the people living there that there is another way to live.

To be honest, Gathering Blue is my least favorite of the trilogy and mainly because unlike the other two main characters, Kira doesn't seem to make as big of a sacrifice to fix her world. I would say more, but I don't want to ruin it for you. But don't let that statement take away from the fact that this is still a powerful little novel in its own right. It gives us another take on what may happen in the future.

The final book in the trilogy is Messenger. 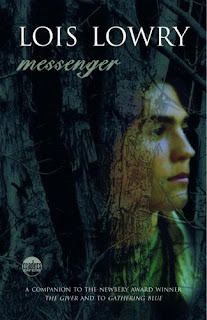 In this final chapter of the set, Matty lives in a village that is a safe haven for those escaping other communities. Matty had escaped years earlier from Kira's village and lives in safety.

Surrounding the village is the forest and Matty is one of the few who can navigate its twisting paths. After the people of his village begin to change and determine to close the borders of their village forever, Matty is sent to fetch Kira and post warnings in the forest to those who are seeing safety.

The first time I read this novel, I bawled like a baby. That NEVER happens to me, so that should tell you how emotionally draining this novel was. The last few chapters are so packed with emotion and tough decisions that they get me every single time.

I love Matty. He is the perfect, unselfish character and the strength he has always warms my heart. He struggles his entire life to find happiness and eventually gets there.

I am grateful I read this again. They moved me just as much on this reread as they did before and I cannot tell you how much I want to place a copy of each of these novels into your hands. And if you do decide to read them, I hope you love them and cherish their strength just as much as I do.
Posted by Allie at 9:00 AM