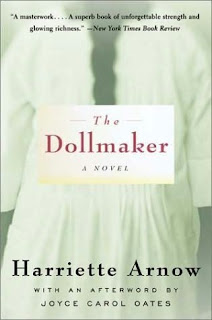 I wouldn't be surprised if you told me you had never heard of The Dollmaker by Harriette Arnow. Or if you questioned why this novel was on my list of classics right beside books by Twain, Dickens, Steinbeck, Woolf, and Conrad. However, when I was trying to figure out my list of books to add on my classics list, I turned to the AP literature list my twelfth grade teacher gave me that first day of school.

The Dollmaker was published in 1954 and was on the AP English test only once (in 1991). The wikipedia entry for the novel isn't even about the novel, but is focused on the made for TV movie starring Jane Fonda. And, when I looked elsewhere, I could find out little about this novel.

I decided to keep it on the list. I'm not really sure why I made that decision way back in August, but I wanted to read this novel. I found the descriptions on book websites and I just knew that this was a book that needed to be read.

I'm not sure yet if that was a good decision or not. I mean, this is a book I know hardly anything about and it might not even be considered a classic because no one seems to have heard of it!

When I decided to start this project, I first pulled all of my classics from my piles of books. I marked down what I had and pursued some more to have a variety to choose from. This was a book that could not be found. I went to one of the big book chains (Borders) to search their aisles and found nothing by Arnow. Since Borders is always my second choice anyway, I went to the Barnes and Noble down the road to see what they had. Again, nothing. Figuring it was time I ask, I hunted down one of my favorite employees and asked her if they had it.

Now, this woman and I have become friendly since I frequent the store way more than I should. She has excellent tastes in books and I often recommend things to her. She searched their computer system and they hadn't had a copy in the store in months. I left that day just deciding to forget about it. It would be among the long list of books I hadn't hunted down yet and would at some later date.

It was only a week or so later that I was back. It had dawned on me that I should simply hunt the used shelves at that Barnes and Noble to see what I could find there (my local store has an amazing used section). I don't have anything against used books and they are friendlier towards my wallet, so I hunted the shelves.

And there is was, in all its beaten up glory: The Dollmaker.

I made sure after I grabbed it to go find that employee to tell her I found a copy. She flipped through it and said it seemed like an excellent book.

Which brings us to now and this post. I have this somewhat elusive book with what seems to be an extremely gripping story. I am anticipating greatness, something to back up my decision to keep this book here.

So what is it about? Here is the synopsis from Barnes and Noble:

"Strong-willed, self-reliant Gertie Nevel's peaceful life in the Kentucky hills was devastated by the brutal winds of change. Uprooted form their backwoods home, she and her family were thrust into the confusion and chaos of wartime Detroit. And in a pitiless world of unendurable poverty, Gertie would battle fiercely and relentlessly to protect those things she held most precious—her children, her heritage...and her triumphant ability to create beauty in the suffocating shadow of ugliness and despair."

Now I remember the draw of this novel. Detroit is a city near and dear to my heart, seeing as I live about 35 minutes north of the city. It is a city with a long, and sometimes violent history. It was the birthplace of the automobile and the Arsenal of Democracy during WWII. And that last line? It sucked me in.

So that is why I am reading this next, to understand Gertie's fear and despair, but also to understand her ability to hope.
Posted by Allie at 3:24 PM