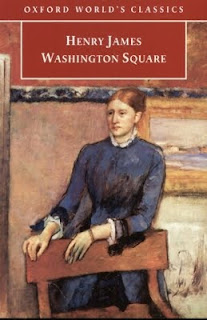 Washington Square by Henry James will be my second experience reading James. I read Daisy Miller for a college course and liked it, but I never went into any of James' other work. Lucky for me that I have 4 chances to read James on my list (the other two titles being The Turn of the Screw and Portrait of a Lady).

But I like his style and swagger and I was reminded that I needed to read this particular novel by my friend Scott.

Scott works with me for the parks system and two winters ago, we got into some great literary discussions. At the time, I was rediscovering my love and admiration for Edith Wharton. I was flying through her work left and right and Scott happened to have a professor he was taking a class with who was also obsessed with Edith. For his class, he had to read The Custom of the Country (which is one of my favorites by Wharton, but not on my list), along with a lot of other titles.

While we discussed Wharton, a LOT, we also talked about the other books he was reading for his class. A few weeks later, he had his copy of Washington Square with him and I asked about it. He told me then that I needed to read it and it would be something I would like. Like the Wharton novel, it centered on some of the rich and fabulous of New York City, just earlier. As he gave me details, I decided I wanted to read it. In fact, I even went out and bought a copy. But then I got side-tracked, and I am sure you know how this goes. I never got around to it and it ended up being another book that would be read at a later date.

Well, Scott reminded me that I never read this, so why not give it a go. it sounds intriguing and full of that gossipy humor and sarcasm that I love in novels centered on "high society." I am sure love it, especially since the other novel Scott suggested for this challenge (McTeague by Frank Norris) was so excellent in a devilish sort of way. Anyway, here is the back cover blurb for your enjoyment;

"Washington Square follows the coming-of-age of its plain-faced, kindhearted heroine, Catherine Sloper. Much to her father's vexation, a handsome opportunist named Morris Townsend woos the long suffering heiress, intent on claiming her fortune. When Catherine stubbornly refuses to call off her engagement, Dr. Sloper forces Catherine to choose between her inheritance and the only man she will ever truly love."
It sounds deliciously juicy doesn't it? Well, for a novel published in 1881, and based in the 1830s on up, it can't be too juicy or all the copies probably would have been burned by now. I'm looking forward to it anyway and I hope that I can rant and rave soon!
Posted by Allie at 11:00 AM