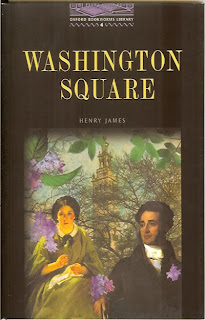 I'm chugging through Washington Square and there are a lot of things to comment on. Based on the description, I really thought I was getting into a fluffy little classic (similar to A Room with a View), but I am finding that to be false.

Instead of a conventional "classic" love story, the novel near opens with an engagement (it is only a few pages in) as opposed to the end of the novel (usually the engagement and eventual marriage signals resolution). This is not so in Washington Square. Here, you have less of a love story, but more of a, "let's see how miserable we can make poor Catherine."

From the beginning, it is made clear that Catherine is two things: wealthy, and slightly unattractive. During this era (1830s and up), it was generally the pretty girls who found men quicker. They were allowed to fall in love and be picky about the man they decided to marry. It was not so for plainer girls. Instead, they would be lucky to find one lover and must accept him at all costs.

So when Catherine meets Morris Townsend, you would believe that her father would be excited. Since Catherine has no mother and was partially raised by her aunt (who is a trip, believe me), the reader would assume that Dr. Sloper would want the best for his little girl. Well, he does push for the best and outright rejects Morris Townsend. Based on some sleuthing and a visit to Townsend's sister, Dr. Sloper deems him unsuitable for his daughter and tells her he will not allow it. Dr. Sloper believs that Townsend is only after Catherine's inheritance and does not actually love her.

What is a girl to do? For a girl like Catherine, who is repeatedly explained as being plain, but wealthy, how can she refuse what might be the only offer of marriage she may get?

This is the dilemma and where I stopped reading, but I want to talk about two things. First, the idea of a "villain." You would think and assume that Townsend is the villain. He is a conniving man and the few glimpses we get of his thoughts turned my stomach. He is only after the wealth that Catherine has and while he might be somewhat affectionate towards her, you have to question his motives, much like her father does. After all, he has no money of his own and is living with his sister (who is widowed with a pack of kids) and "mooching."

But he really isn't the worst villain. That award goes to Dr. Sloper. While he might be thinking he has Catherine's best interests at heart, he goes about it in a completely demoralizing way. From the very beginning he is down on his daughter:

"Once, when the girl was about twelve years old, he had said to her [his sister]:
'Try and make a clever woman of her, Lavinia; I should like her to be a clever woman.'
Mrs. Penniman, at this, looked thoughtful a moment. 'My dear Austin,' she then inquired, 'do you think it is better to be clever than to be good?'
'Good for what?' asked the doctor. 'You are good for nothing unless you are clever,'" (10).

You can see by this that Dr. Sloper does not see and appreciate his daughter for what she is. She never "becomes" clever, but she does try to do good by her father and uphold his wishes. You can't fault her for trying, but merely feel for a girl who is continually degraded and put down by her father.

What I am trying to say is this. While the real Washington Square represented a place of wealth and happiness and success, that was not always the case once you moved into the homes of the people who dwelt there. And while Washington Square might seem like a pleasant novel full of love and grand romance and gestures, it is the complete opposite; instead it shows the darker side of courtship and unapproving fathers; and men who are not what they pretend to be.
Posted by Allie at 9:00 AM