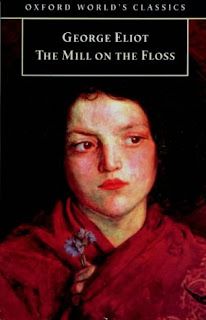 As I am plunging wholeheartedly into The Mill on the Floss, I am already thinking about the heroine...a lot. At the time the novel begins, Maggie Tulliver is just a little girl who seems to be almost unloved by her family. From the beginning she is seen as clever, but not attractive. Where attractiveness seems to equate to blonde hair, light skin, and blue eyes, Maggie's appearance is different-with dark eyes, dark skin, and dark hair.

The only things Maggie really seems to have going for her is her imagination and her cleverness. And apparently those are not appealing traits. Her father continuously refers to her as the "clever little wench" or some variation. While I know he means it as a pet name, it is rather insulting. I mean, being clever is a good thing, but not for women in this time.

So as I am reading about poor little Maggie, I have to wonder if this will follow a familiar story arch. The young clever girl will grow up to realize that while she may be clever, she is nothing else. She is not a beauty and her cleverness is not a positive attribute. So far it seems as this is true in this novel, as Mr. Tulliver is only worried about the education of his son, Tom, who not nearly as smart or clever as his sister.

I have to keep thinking to how many female heroines have these traits. Let's make a list:
I don't know about you, but I can think of quite a few who have a few of those qualities. What is it about crafting a character with those traits? Is it that the writers who create these characters felt that way about themselves when they were younger? Or is it that most adult women readers were at one time that same little girl, or can relate to her?

Personally, I know that I can relate better to female characters who have some of those characteristics. I was reading all the time when I was younger and my brothers used to tease me about it. I'm also halfway intelligent and like Maggie, have big dreams for something "more." I am sure I am not the only one. Is that way so many writers create characters like this? So they are relatable to the main audience who reads? I could be completely wrong here, but I feel like many of the most well-loved female characters have at least a few of those character traits, and those traits are commonly held by a large majority of the reading audience.

Again, this is all my opinion, but it is interesting to think about. I'm curious to see if my guesses about Maggie come true.
Posted by Allie at 9:00 AM

Email ThisBlogThis!Share to TwitterShare to FacebookShare to Pinterest
Labels: George Eliot, The Mill on the Floss