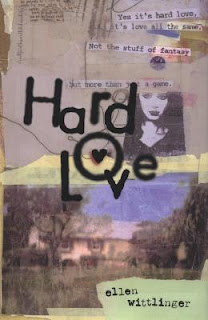 I decided to focus on another great YA novel this week for my "Thursday Treat," and hopefully it is a lesser known YA novel for those of you in the blogging world.

Hard Love by Ellen Wittlinger was first published back in 1999, so it has been out for awhile. As a teen, I never saw this book publicized or saw it in the library or bookstore. It wasn't until college that I read this novel.

As part of my education requirement, I had to take a YA literature class (which ended up being a favorite) and I had the opportunity to read a lot of things I never would have found. A previous "Thursday Treat" post talks about my favorite novel from the class: Sammy and Juliana in Hollywood.

It was also in this class where the professor told us that YA is the only place where authors are allowed total freedom. I totally agree with that sentiment.

Hard Love was one of the last books we read as a class and we were all very surprised by it. It was not at all what any of us expected and we were all surprised by the subject. One of my discussion group members, Ben, had been dreading reading it, thinking it was a "girl" book, but ended up loving it.

Hard Love is the story of two teens who feel misunderstood and alone. John is an extremely shy and reserved boy who has no connection to either of his parents. He has only one friend at school, who doesn't even seem like much of a friend while John is battling inner demons. With no where else to turn, John begins writing a zine, a homemade magazine that he prints and leaves at a local coffee shop.

It is through the zine world that he meets Marisol. A gothic girl, Marisol is misunderstood and stereostyped. Her zine attracts John's attention early on for its honesty and personality. He arranges dates to meet with her and discuss their zines and life in general.

It is through these dates that John learns to deal with emotion. Finally he feels a real and true connection with another human being, and might take that connection too far. After all, Marisol is a lesbian-a fact she makes very clear.

This is an incredibly personal and moving book. When I read it back in college, I remember thinking that I knew people like John and Marisol back in high school. I remember kids feeling like they were all alone. I knew of people who struggled to connect with others because they simply didn't know.

John's struggle with his parents was also very emotionally draining. You feel so keenly for him that you want to step in and take his side. You also want to hold his hand and guide him through this tough patch and show him-everything will be okay in the end.

When our class finished reading the book, we all loved it. One of the main things we loved was the formatting of zine excerpts within the novel. It made the novel much more realistic and appealing. It also sparked a lot of great conversation-especially about the possibility of teaching a book with homosexuality in it in a high school setting. How would we go about that? We also talked a lot about how kids would react to this and came to the conclusion that they would love it for its honesty.

In all, Hard Love is an inspiring novel about hope, love, and friendship. I regret not finding it sooner, but I am glad I can pass it on to you.

**I have also read some of Wittlinger's other work. Heart on My Sleeve is a novel completely in e-mails and texts, which showcases how relationships over these mediums are never what they seem. Wittlinger also published Love & Lies in 2008, which is a companion to Hard Love. I have not had a chance to read it yet**
Posted by Allie at 2:00 PM