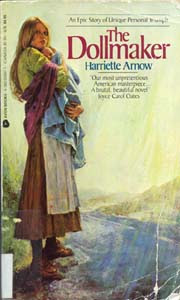 I am not sure if I have anything of meaning left to say about The Dollmaker. Yesterday, I wrote a rather...personal post about my experience finishing the book. I think I should simply expand on it and give a few final thoughts.

The Dollmaker is centered on Gertie Nevels and her family. They live in a rural part of Kentucky in the middle of World War II. During the course of the war, all of the men of fighting age have either been drafted, or moved away to work in a factory, leaving their small village with only a few men left. The only man left of fighting age is her husband, Clovis, who is sought out by the military.

To escape being sent off to war, Clovis makes his way to Detroit to work in one of the factories. Gertie and the children stay behind, where Gertie finally purchases a piece of land for their own to farm while they wait for Clovis to come home. While Gertie and her 5 children are set to wait it out and farm the land, her mother guilts her into selling her hard-earned land and heading north to join Clovis.

Once in Detroit, Gertie and her children must "adjust" to life in the projects of Detroit. They live in a housing project with people similar to them. There, the kids learn to be normal and give up their "hillbilly" ways. Gertie struggles to come to terms with the turn her life has taken. Her only comfort is her whittling.

Gertie brought a large piece of wood with her to Detroit, which calls to her to be carved into an image of Christ. Slowly she works on it as events unfold around which spiral out of control. Through all of the tragedy and heartache that inevitably finds them, Gertie holds onto her resolve and her faith.

Ultimately, Gertie must make a sacrifice to save her family and who they are meant to be.

To say I was moved by this story is a gross understatement. My post yesterday will prove that. The pain and suffering the people face in this novel is monumental. It broke my own heart and it placed everything that I am facing right now into perspective. Through all the adversity and pain, Gertie held on to her faith and what she knew to be her's alone-her whittling.

This is a powerful novel. The characters and scenes haunt you after you close it and you feel like you are very much a part of their lives. It takes a great deal of skill for an author to accomplish that, and Arnow does it very well.

If my own personal experience with it is not enough to convince you to find a copy, I'm not sure what will. But this is a beautiful piece of literature and something worthy of being on my list, as unknown as it is.