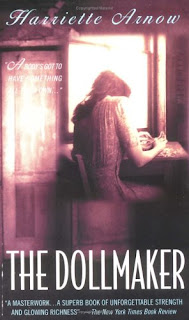 There are scenes that you can come across in reading that really just chill your bones. I read such a scene in Germinal back in December. It so shocked me that I had to set the book aside and mentally get over the images before I could go back to reading that novel. I also had a huge urge to talk about it with someone, so Matt was the lucky recipient of my ranting about the disturbing images that plagued my mind.

Sometimes, the chill and feel of a book can offset you. I feel that way with The Dollmaker. From the beginning, the reader knows that pain and heartache are coming. When the first tragedy happens, you think, "Oh, things must be getting better after this." Then the next thing happens and you think, "The author can't do anymore to this family."

And it seems like she is overdoing the tragedy that this family feels, but you have to step back and look at it all in a broader scope. The whole era the novel is set in (World War II) is a tragedy. Mothers and sisters and wives received letters that their husbands and sons and brothers were dead or missing constantly. Arnow relives that fear in the novel and the characters. They are living within a tragedy and are merely victims of circumstance.

So when the great tragedy strikes in the middle of this novel, you feel so deeply for the characters. I got to this scene late at night when Matt was sleeping and the cats were curled up on my chest.

I rarely get moved to tears by anything that is not directly related to my own life. Even then, it takes a lot to drive me to tears. So I am not one of those girls who cries during sappy movies, or who gets emotional reading most books.

So when I say I teared up reading about the pain of the Nevels family, it was a powerful amount of pain. And it was well-written.

And while I am only halfway through the novel, I know that Arnow is going to throw more into the lives of the Nevels family and the people living near them in the projects of Detroit. And where some writers through all this angst and torment into their novels to try and make them more appealing (I am currently thinking of those sappy Sweet Valley High novels I used to read), Arnow is not using tragedy as a way to rev up the reader. Instead, she is using it as a reflection of the time period.

I love the era of World War II in America. In college, I took a couple of classes on the era to fulfill requirements for my history degree. For one class, we had to interview an individual who lived during the time period. I was matched up with an older lady who lived in Lansing in an assisted living center. She lived in Detroit during the war as a little girl. Her father fought overseas in Europe and her mother and three older brothers all worked for the factories in Detroit. Her stories were very similar to the experiences Arnow shares (Arnow also lived in the projects during the war) and this woman also painted a very tragic picture of life on the home front during the war.

When I was interviewing this woman, I remember feeling the tragedy of the era. Everyone left back thought the world was coming to an end. Boys were being drafted into the military and being shot. There were food and gas shortages. To those left behind, some questioned whether it would be better to be "over there" fighting as opposed to staying home and waiting.

I can feel this pain and tragedy in Arnow's novel. She has captured the heart of the times.

It is simply beautiful.
Posted by Allie at 10:00 AM