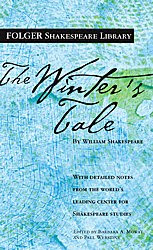 I figure it is time to get another Shakespeare play off of my list. Since I am not brave enough to venture into reading a play that I haven't already previously read, I decided to go with a lesser known play this time around (the last Shakespeare play I read was Much Ado About Nothing).

The Winter's Tale is another comedy, although it doesn't seem so at first. I have read it once before, during my college Shakespeare class. At the time, I remember thinking that it was alright. It didn't match up to some of the other plays we read in that class, but I still enjoyed it (unlike The Two Gentlemen of Verona which just annoyed me. Thankfully, I am not reading one for this challenge).

Anyway, even though I enjoyed it, I barely remember the plot line. I know some of the characters names; namely, Perdita, Leontes, and Hermione. I also recall that there are some small similarities between the play and Harry Potter. We discussed this in that class, which is why I remember, so as I read I'll try and pull those details out. I like finding inspiration for modern novels within Shakespeare.

Perhaps after giving another old friend a try I'll summon the courage to tackle a new Shakespeare play. I have reservations about it. It is really easy to re-read a play once you are familiar with the storyline because you know essentially what is going to happen and if some language escapes you, it still makes sense. I'm just a little worried about my abilities to decipher something new and unfamiliar on my own.

Off to Shakespeare land!
Posted by Allie at 7:30 AM

Email ThisBlogThis!Share to TwitterShare to FacebookShare to Pinterest
Labels: Harry Potter, Much Ado About Nothing, The Two Gentlemen of Verona, The Winter's Tale, William Shakespeare