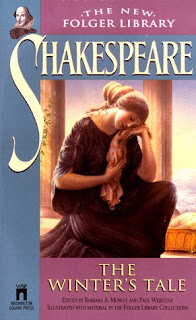 As I have been flying through The Winter's Tale (I am currently in Act 4, Scene 4), I have been noting the similarities between this play and one of the Harry Potter books. In my post from yesterday, I mentioned how when I read this for my college Shakespeare class we had a long discussion about some similarities. It all came flooding back to me as I started to read.

Now, if you don't want to know the ending of the play, it might be best to stop reading now, because I am certainly going to go there.

You have been warned.

Okay then. The Winter's Tale is essentially about King Leontes of Sicilia. At the beginning of the play, King Polixenes of Bohemia is visiting. Leontes thinks that his wife, Hermione is cheating on him with Polixenes. He creates a scene and accuses her of being a whore, then banishes Polixenes from Sicilia.

Obviously, the name Hermione rings a bell for anyone who has read Harry Potter. The relationship between these three monarchs is a lot like the relationship between Harry, Ron, and Hermione. At times in that relationship, we do see betrayal where one individual is banished or left out. Feelings and miscommunication play a large role in that separation, as it does here.

Moving on in the play, Hermione gives birth to a child, Perdita, who is sent away by Leontes because he thinks it isn't his. Queen Hermione soon "dies" after and Leontes is left grieving for what he did.

While there aren't as many similarities here, there are later in the play.

The fourth and fifth acts resolve the conflict. Sixteen years later (time turner anyone?), Perdita returns with Florizell (Polixenes' son) to Sicilia, as Florizell is banished by his father for wanting to marry a mere shepherd's daughter. No one at the time of this banishment knows that Perdita is actually Leontes' daughter. Once reunited, the group go to pay respects to a lifelike statue of Hermione. Upon seeing it, they are told it is made of stone. Hermione soon comes back to life and everything is solved.

In that class, we talked a lot about how Hermione in stone reminded us of Harry Potter and the Chamber of Secrets, where Hermione spends a good chunk of the novel petrified from the basilisk. She is essentially frozen in time, and time also plays a large part in the play. The manipulation of time in some of Shakespeare's plays is a big deal, and time takes on the role of a character. The same is true for some of the Harry Potter novels. In Harry Potter and the Prisoner of Azkaban, Hermione can control time with her time turner to correct wrongs in a single night. While Shakespeare didn't utilize time in quite the same manner, he came close with time fast-forwarding often through his plays.

One last connection is the mention of the basilisk. Yep, the mythical snake is mentioned in the same play where the character Hermione is "Cast in stone." Here are the direct lines:

"How caught of me?
Make me not sighted like the basilisk.
I have looked on thousands who have sped the better
By my regard, but none killed so," (I.ii. 465-469).

Leontes is actually speaking in this piece to Camillo (a courtier) as well as Polixenes. I find it interesting to draw the comparison here. Shakespeare also explains that the basilisk was known for killing with its sight, but hasn't yet (in this context). If you recall from Chamber of Secrets), the basilisk doesn't kill anyone, but merely petrifies them until they can be revived. In the play, Leontes petrifies his own wife until she is eventually revived by his acknowledgment of wrong doing.

I have to wonder whether this is all merely a coincidence and I am pulling too much from both texts, or if J.K. Rowling really drew inspiration from the play. It would be an interesting question to ask and from all my reading, I haven't found an answer.

I am hoping that all made sense. In any case, I only have a small portion to go before I finish.