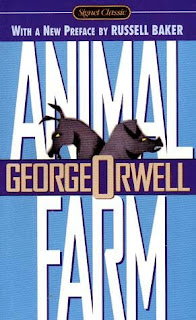 This is probably one of the fastest reads ever. This is such a slim book that is so involved you have no choice but to finish it as soon as you sit down to start it.

Since this was my fourth or fifth reread of Animal Farm, I flew through it even quicker and still found more to love. I now have a larger fondness for the donkey, Benjamin. He is the pessimistic old man of the group, who doesn't always have a lot to say. Because of that, the other animals seem to ignore him without realizing that he is really the one they should be listening to.

I also really like the character Squealer. Squealer is a pig and if you are familiar with this novel, you'll know that the pigs kind of run the show. Squealer is the spokespig and has the task of explaining to the other animals new rules and procedures, while also dissipating unrest and confusion. Squealer is a fitting name for his occupation.

I also love Boxer, the large and muscular horse that sacrifices himself to try and better the farm. He continues to push himself until he breaks. Boxer is the unsung hero and every time I read about him, I get a little upset. I love that big horse.

I love the political turmoil and the changes the pigs continuously make to the commandments to fit their needs and desires. Obviously the novel is full of these references and a lot can be learned from it:
So yes, this is a powerful little novel. When the pigs change the commandments to one single rule at the end of the novel, you get the full impact of what Orwell is trying to say:

We can obviously change this to get to the real message of the book:

"All men are equal.
But some men are more equal than others."

The possibilities are limitless.

If you really want to question corruption, politics, and leadership, this little novel really says it all. It is surprising how deep 139 pages can be.

Finishing this novel also means that I have completed one book for the LOST Books Challenge. While I have still not finished all the seasons, I did find quite a few comparisons for what I have seen in the show.

Early on in the show's run, it is made clear that there are a few survivors who hold more power than the others (the main characters obviously). As a group, they call the shots and run things, often making the minor characters their little puppets. Since it is a show and they are the main characters, the audience has to sympathize with them. After all, they are the ones we are introduced to and care about.

However, you get a glimpse of this kind of Animal Farm corruption in an episode in Season 2 where a minor(ish) character is attempting to build a sign on the beach to get rescued. The characters simply dismiss it. There is also a lot of discussion about who is in charge and who is calling the shots.

It is interesting, to say the least.