Wow. What a week it has been! Matt and I have been busy with a few things around the apartment. Even though we've been here for a few months, it is finally starting to look and feel like home. We have pictures up and it looks a little more relaxing.

I've also been busy learning some new recipes this week. I've been trying to keep us on a food budget so we aren't spending a ton of money on food we won't eat. It is actually pretty easy to do with just the 2 of us and we've found some things that we really like to eat.

I also went to substitute teacher training on Thursday to get readmitted to the system so I can start getting some sub jobs. Only working 2 days/week gets old pretty fast and while I have lots of time on my hands, I don't get a whole lot accomplished. Hopefully I get some steady work and can balance some subbing with the parks job (which goes back to full time hours and more pay at the end of March!).

I managed to sneak away to the bookstore the other night, which was the first time I had been in a bookstore in a long while! I have been trying to avoid going in because I inevitably want to buy something, if not everything. Since it had been a bit, I made sure to walk around and look at everything. There are a lot of new titles out (especially in sci-fi and fantasy) that I want to read RIGHT NOW, but I'll be patient and wait. The YA section was depressing.

Now, don't get me wrong. I LOVE YA and I read a lot of it, but I feel like amidst all the good books with original ideas are 50 others that don't do a good job. I get it that vampires and werewolves are "in," but I would love to see something different on the shelves. Granted, I haven't read any new YA in about 6 months, so I don't really know. These are merely my impressions from looking at the shelves.

I was also disappointed to see the following on a big display with Twilight and the vampire books that are booming in popularity: 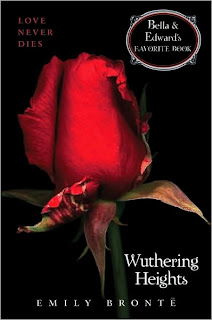 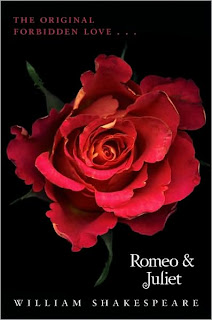 It really just made my stomach turn. It is not that I am against teens finding these books and loving them as much as Twilight....it is the clear marketing ploy. Granted, it is clever, but I feel it takes away from the value of these great works. Try as I might, I cannot hold Twilight in comparison to Romeo and Juliet, Wuthering Heights, and Pride and Prejudice and call them equal.

Anyway, I hunted through the used section last and found a few more titles on my TBR list that I don't own. I finally picked up one of Graham Greene's novels, The Power and the Glory, as well as the other Hemingway that I need to read, The Sun Also Rises. I also found a great collection of some of the Greek tragedies. I haven't even gone near any of the Greek stuff since The Odyssey, so I thought I should get on that. The last book I found was a really cool edition of The Song of Solomon by Toni Morrison.

I went looking for one of Richardson's two novels on my list: Clarissa and Pamela but found neither-not even in the fiction section! There were also no copies of Gone with the Wind to be found, or some of the Virginia Woolf titles on my list! And while it looks like the store is rearranging, I hope that they restock. I was sorely disappointed, especially since it is my favorite bookstore in the area.

In reading news this week, I finished not only The Mill on the Floss by George Eliot, but also Animal Farm by George Orwell. Orwell's book only took an hour or so since it is so slim, but I enjoyed it anyway. I am in the middle of The Shipping News by Annie Proulx...which is an odd novel and newer than most of the books on my list (it was published in 1993). It stands as one of the "modern" classics I am reading.

I also made some new cosmetic changes to the blog. There are links at the top to an introduction to why I am doing this, the list of books I am going to read, as well as the list (in order) of what I have finished already. In the finished list, I also have the titles linked to my personal favorite post about that book. Enjoy!

I have some great things planned in the coming weeks. There is a giveaway that I am waiting to launch once I hit Book 25! Keep an eye out for it in the next week or so.

This week I am planning on finishing The Shipping News as well as Slaughterhouse Five by Kurt Vonnegut, so it should be another good reading week.

Happy reading everyone!
Posted by Allie at 3:00 PM