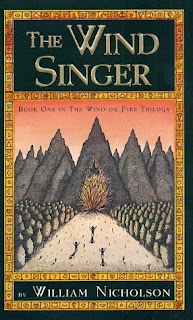 I have a huge soft spot for YA fantasy and science fiction. You can blame that on the popularity of Harry Potter. Before I read any of the HP novels, I was mainly reading adult science-fiction and fantasy.

I discovered The Wind Singer in 2001. The book had been out for a year and was just released in paperback. More than anything else, I was drawn to the cover. Looking at it, I had no idea what the book might be about, but I thought I would give it a go.

That first time I read it I knew I loved it. I found it original (even at the young age of 15 or 16) and unique. I loved the characters, especially Mumpo. I loved the battle scene with wooden ships on the broad expanse of the desert. It was beautiful and really captured my attention.

Since my funds were limited at that age, I had to wait for the next book in the trilogy, Slaves of the Mastery, to come out in paperback to purchase it (in 2003). Shortly after, the third book came out, Firesong. I re-read the first before reading the second two, and while I love the series as a whole, I still have a fondness for the first book.

So what is it about? Here is the description from the back of my copy:

"Kestrel Hath's schoolroom rebellion against the stifling caste system of Aramanth leads to explosive consequences for her and her family: they are relegated to the city's lowest caste and ostracized. With nothing left to lose, Kestrel and her twin brother, Bowman, do the unthinkable: they leave the city walls. Their only hope to rescue the rest of their family is to find the key to the wind singer. The wind singer, a long-defunct device in the city's center, was once the source of happiness and harmony in Aramanth. But the key was given to an evil spirit-lord, the Morah, in exchange for the Morah's calling off its terrible army of Zars. Armed with desperate bravery, wits, and determination, Kestrel, Bowman, and a tagalong classmate set off to find the key. Along the way they meet kind allies and terrible foes, but in order to succeed in their quest they must face the most sinister force of all: the powerful Morah."

The second and third book carry the story farther and tell of what happens when the twins think they have accomplished everything they set out to do. Like the first, they are also imaginative and detailed.

One thing I need to share about the author, William Nicholson, is that writing novels became his second career. Before attempting novels, Nicholson was known for writing screenplays; most notably the screen play for the film, "Gladiator." It is no wonder that he can describe epic battles and richly develop his characters.

This is a series I often recommend and I hope you will enjoy it as much as I did!

*I do have to note, however, that Nicholson's second YA series (The Noble Warriors) was not nearly as good as this series. In fact, I pretty much hated it. Like many other authors, sometimes storylines do not pan out. While this one did, his other did not.
Posted by Allie at 4:31 PM