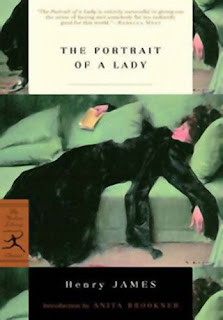 “I always want to know the things one shouldn't do."
"So as to do them?" asked her aunt.
"So as to choose." said Isabel."

I should warn you that this post is going to be full of gushing and adoration for James' novel. It was just that good. No, not good...amazing. Wonderful. Inspiring. Heartbreaking.

I can't even think of an adjective to describe the way this book got to me. I love it when a book sinks deep down into you so that you care with every passing page about every word, sentence, paragraph, and punctuation mark.

The Portrait of a Lady is a phenomenal work in character study and development. And while lengthy (my paperback was 625 pages), the book moves at a constant pace, propelling the story and character of Isabel Archer forward as she learns the truth about the people around her.

“She had an immense curiosity about life, and was constantly staring and wondering.”

The novel is about Isabel, those around her, and the exploration of whether or not she will fall to the needs and demands of the society around her. Will she continue to let them see her in a light that is unflattering? Will she let them pressure and cajole her into becoming something stationary and solid?

The beginning of the novel opens in a hopeful manner. Isabel, after her uncle's death, finds herself with the opportunity to make something grand of herself. No longer weighed down with the pressure of a low income and no family support, she is able to travel and explore the world as she desires. She determines never to marry, but to continue to learn, explore, and live a life only for herself.

“To say that she had a book is to say that her solitude did not press upon her; for her love of knowledge had a fertilizing quality and her imagination was strong."

The quest for knowledge didn't leave her. Instead, she allowed herself to be persuaded that perhaps her choice was inappropriate, and that perhaps, it might be better to go along with the plan that others had set aside for her.

Thus, in the middle of the novel, there is a large push and pull between these two extremes. At her core, Isabel Archer is a determined, thoughtful, and independent woman. She has the means to continue her lifestyle, and to continue to do the things her heart desires. There are people in her life who do support that wish-to remain single, unattached, and full of the motivation to learn from the world around her.

On the other hand, there are characters who wish only for Isabel to settle down, to marry, and start a traditional family life. They pressure her to give up independence because it is foolish, to share her new-found wealth, and to give up the very essence of who she is.

“Things are always different than what they might be...If you wait for them to change, you will never do anything.”

Isabel makes a choice and marries. The man she marries is a manipulative man, and he lies to her, shelters her, and pretends that the negativity isn't there. It is a marriage built on lies and while Isabel eventually realizes that she has been taken in, that her husband has succeeded in crushing the parts of her that everyone loved, she's trapped. There is no way for her to escape the realization that she lost a very real part of herself.

In many ways, Isabel became a simple portrait of herself. The things that made her passionate, witty, and charming are hidden beneath the layers of paints and falsehoods that her husband and those close to her gave her. She no longer has the freedom to change, but must remain stagnant, in one place, with one lonely expression of longing. Those outside of the situation must look at her and see her in only one way-a woman lost to the pressures and constraints of a loveless marriage.

And of course, James brings into it some level of hope. Because at one time, Isabel Archer was a woman who drew the attention of many men. They desired her for her charm, her beauty, and the manner in which she spoke to them. And while that part of her might be submerged beneath the lies of her marriage, it is still there. At the core, Isabel still has all of it-it has merely been repressed.

So I love it that James gives her a chance. The men she once knew still love her in their own way. And while they know she is trapped with no real hope of escaping, they can still yearn to save her from that kind of repression...

“It has made me better loving you...it has made me wiser, and easier, and brighter. I used to want a great many things before, and to be angry that I did not have them. Theoretically, I was satisfied. I flattered myself that I had limited my wants. But I was subject to irritation; I used to have morbid sterile hateful fits of hunger, of desire. Now I really am satisfied, because I can’t think of anything better. It’s just as when one has been trying to spell out a book in the twilight, and suddenly the lamp comes in. I had been putting out my eyes over the book of life, and finding nothing to reward me for my pains; but now that I can read it properly I see that it’s a delightful story.”

I love that James slowly builds the tension into the final third of the book. As a reader, we have seen Isabel in high moments-coming into her wealth, rejecting suitors so that she could be independent. We have also seen her at some lows-when her husband refuses to let her see the remains of her family, when the lies and secrets emerge.

We have grown with Isabel, and we have seen how she has fallen into depression. While those who cans till talk to her persuade her to leave her miserable life and escape, she doesn't think she can. Isabel felt that no matter what she did, she was doomed to continue this kind of life, stuck in place, trapped, and alone.

Oh, how I could relate to that feeling! The knowledge that I have felt the same way about my unemployment, the failure to move forward in my life-it is an all-encompassing feeling of utter failure. I truly felt for Isabel. I know what it is like to have people reaching for you to emerge back into yourself...but instead of listening, you pull farther in.

“To live only to suffer—only to feel the injury of life repeated and enlarged—it seemed to her she was too valuable, too capable, for that. Then she wondered if it were vain and stupid to think so well of herself. When had it even been a guarantee to be valuable? Wasn't all history full of the destruction of precious things? Wasn't it much more probable that if one were fine one would suffer?”

Yes, I understood Isabel. I know that feeling of helplessness, of wanting for something grander and more wonderful than you could dare to hope. I got it, and I felt for her.

So in the end, when she makes her decision to run or stay, to continue in stagnancy or jump for freedom, I know why she did what she did. I understood that feeling of uncertainty.

And yes, I wept a bit for Isabel for the choice she made. It moved me.

There is something truly grand about this novel. I think, far more than any other novel I've read for this project, this one truly got to a deep part of myself. I was there with Isabel. I got it, I understood her on every level. I don't always connect this deeply to a book, and it takes an incredibly skilled and conscientious author to bring that kind of emotion from me, but this is a book I will never forget.

And, as cliche as it might sound, whenever I stare at a portrait, I'm going to have to wonder...was that person who they appeared to be?

“And remember this, that if you've been hated, you've also been loved.”
Posted by Allie at 8:00 AM

Email ThisBlogThis!Share to TwitterShare to FacebookShare to Pinterest
Labels: Favorite Passages, Finished, Henry James, The Portrait of a Lady